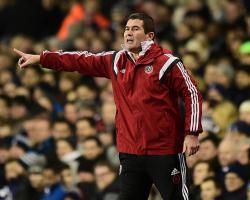 There were some major shocks sprung by lower-league clubs facing Barclays Premier League opposition in the FA Cup fourth round, most notably on Saturday when Sky Bet League One Bradford won 4-2 at Chelsea while Championship outfit Middlesbrough triumphed 2-0 at Manchester City.

And Clough, whose League One promotion-chasers go into Wednesday's clash against top-flight Tottenham at Bramall Lane 1-0 down in the tie, said: "I read some quotes from Bradford players saying the Friday night game, where Cambridge drew 0-0 at home against Manchester United, gave them inspiration and belief, and we are going to try to use the weekend in the same sort of way.

"But the other side of it is that I think it all will have put Spurs on high alert - if the first leg didn't already - that if you are not careful, lower-league teams can cause you a problem."

Clough's men are certainly no strangers to causing cup upsets themselves, the Blades having knocked out Premier League sides in Aston Villa and Fulham on their way to last season's FA Cup semi-finals, despatching another in QPR in the third round this term and seeing off two more in West Ham and Southampton during the current League Cup run.

And he has every belief those experiences will set United in good stead for Wednesday.

"We have still got quite a few of the lads from the FA Cup run last year, and the other ones are loving it too," Clough said.

"Every player and supporter is looking forward to Wednesday night."

"I don't think it is even to do with the teams they put out sometimes," the 48-year-old said.

"I just think with the majority of the lower-league lads being British and having been brought up with cup traditions, it just probably means a little bit more to them.

"That is not anything too demeaning with regard to the foreign lads - I just think when you are brought up with it, it is inevitable that you are going to understand its importance a little bit more."

United are currently eighth in the third tier and still in both the main domestic knockout competitions, and Clough admits extended cup participation can make things tough in terms of sustaining league momentum.

But he insists he never wants anything other than victory from a tie - something unquestionably the case on Wednesday when the prize is a Wembley final.

"It is very difficult to maintain a challenge for promotion while you are still in both cups, without a doubt," said Clough, whose side drew their FA Cup fourth-round tie at Preston 1-1 on Saturday.

"But when you come to these games, you can't say 'it would be better for us to lose today'

We don't want to lose games.

"People suggested we didn't want a replay (against Preston), but we'd take that rather than be out of the competition any day of the week

That is the attitude we have had in all of the cups."

Tottenham will be looking to bounce back on Wednesday from their FA Cup elimination at the hands of Premier League basement boys Leicester at the weekend, and despite being at home, Clough thinks his players may have an even tougher task on their hands this time than they did in the first leg last week.

"It might be strange - we might have done the easy part, believe it or not," Clough said.

"Over two legs you get maybe one shot at these teams when they are not quite sure about you, and all the onus, expectation and pressure was on them at White Hart Lane.

"I think they may be a bit more relaxed at Bramall Lane, because they have a one-goal lead and the onus is very much on us now to go and create.

"It will be an unbelievable achievement for the club, as a League One club, to get to the final."