Flop or Fighter: Can Liverpools Ben Woodburn Turn His Faltering Career Around?

When Ben Woodburn seized on Georginio Wijnaldum's flick to finish like a seasoned pro into the top corner of Leeds' net on a November night in 2016, it felt like

At the age of 17 years and 45 days, Woodburn had become the youngest player ever to score for Liverpool, beating Michael Owen by 98 days. One day, t 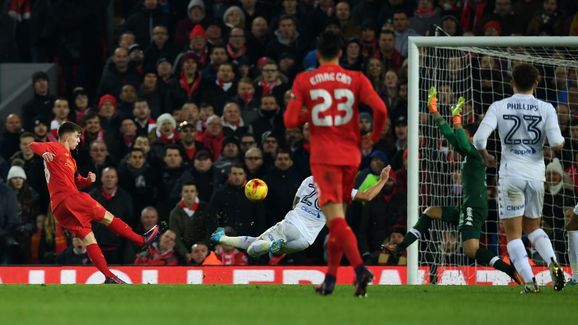 Nearly two years on from the best night of his life, Woodburn is once again preparing to face Leeds, LiverpoolSheffield United

Once Woodburn scored that goal, comparisons to Owen were inevitable. Both had grown up in Cheshire and joined Liverpool

That's where the similarities end, unfortunately. Within two years of making his Liverpool debut, Owen had scored 47 goals for the Reds and written his name into England folklore with that incredible individual strike against Argentina the 1998 World Cup. At the start of 2017, Woodburn was named as one of the players to watch that year by both ​Sky Sports and ​the Guardian, despite the fact that he was yet to start a Premier League match. In November 2017, Ian Rush told ​the Mirror that Woodburn was a more skilful player than Owen.

The hype wasn't without merit. Woodburn was named Liverpool's Academy Player of the Season for 2016/17 after scoring eight Premier League 2 goals. He scored five minutes into his Wales debut against Austria. The man keeping Woodburn out of the team at Bramall Lane, Mark Duffy, provides a cautionary but encouraging tale for the youngster. Duffy started his career at Liverpool but failed to make the grade. Within a year of leaving Anfield, he was playing part-time for Vauxhall Motors. His dreams seemed to be over.

Over the course of the last 14 years, Duffy has slowly worked his way back up through the leagues, via Southport, Morecambe, Scunthorpe, Doncaster and Birmingham, before signing for Sheffield United in 2016. Now, at the age of 33, he is closer than he has ever been to playing Premier League football.

By scoring for Liverpool and playing in the Premier League, Woodburn achieved at the age of 17 what Duffy, and many others, never have. Comparisons to Owen and

#LFC to consider recalling Ben Woodburn in January due to lack of playing time at Sheffield Utd.

The man keeping him out of the team at Bramall Lane was released by the Reds 17 years ago.https://t.co/Nflu2uYxBK

He needs to choose his next step wisely though. A loan move to a smaller Championship club might provide more opportunities for him to get his eye in under less pressure. Woodburn's Premier League 2 record shows that he thrives on confidence and consistency, with his goals and assists coming in patches of 3-5 matches, so he needs an extended run of games.

The landscape at Liverpool could change over the next few years, but probably not so dramatically that Woodburn will be able to work his way into contention. Liverpool cannot afford to be sentimental with their selections and their current front line looks pretty untouchable.

Woodburn will never be the next Michael Owen. Perhaps he'll never play another game for Liverpool. But if he can get his career back on track in the Championship and work his way back to the Premier League, he could still fulfil his potential. Starting against Leeds on Saturday.