Callum Wilson opened the scoring on 13 minutes, blasting home from close range after some pinball in the penalty area to give the visitors the lead.

Sheffield United grew into the match as the first half progressed, and the Blades pulled level in injury time, when club legend Billy Sharp poked the ball into the net following a scramble in the six-yard box. Tempers flared in the second half with plenty to play for at both ends of the table, and Andrew Surman was booked for an altercation with Blades boss Chris Wilder. Nathan Ake came close to restoring the visitors' lead, but his effort went narrowly wide.

Dean Henderson pulled off a brilliant save on 70 minutes to deny Ryan Fraser, as Bournemouth sensed the opportunity to snatch all three points. But it was the hosts who struck the decisive blow however, when substitute John Lundstram slotted home coolly to snatch the victory and put the Blades two points behind fourth-place Chelsea.

Here's 90min's review of the game.

Even on an off-day, this ​Sheffield United team is a pleasure to watch. The Blades have such a unique style of play, and even if it has been analysed out by the rest of the Premier League, it remains an incredibly difficult system to combat.

Despite not being at their scintillating best, the hosts still dominated large parts of the game and always looked the more likely to claim the three points. At full flow, the Blades are relentless. The overlapping and underlapping centre-backs present a style of football that has rarely been seen in the top-flight, and their ability to overload wide areas allows their midfielders to play a variety of cute and cutting passes behind defensive lines.

The build up play is exceptional when it all comes together, and their desire to play is matched equally by their intense work-rate and pressing.

There are not many better love stories in football than Billy Sharp and Sheffield United, and the Blades legend continues to write the next pages of this romantic novel.

Sharp was superb on Sunday afternoon, running in behind and linking up play like a man who laughs in the face of age and time, and he capped off a committed first-half performance with a deserved goal to level proceedings. 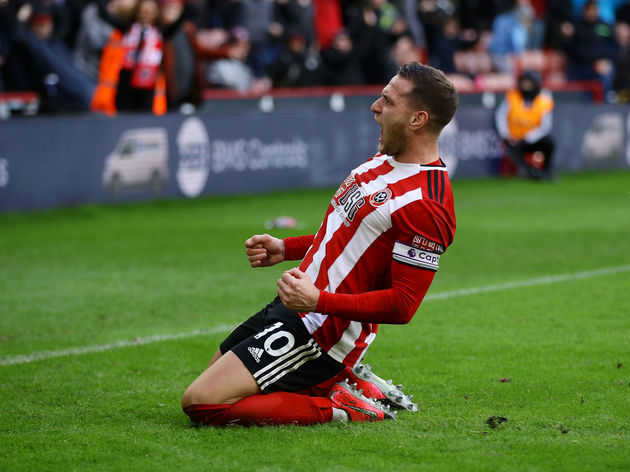 The 34-year-old has been forced to play a bit-part role for the Blades this season, and there were rumours that he may be loaned out to the Championship in the January transfer window.

What a waste that would have been.

Sharp once again demonstrated his right to be playing at the highest level, and his determined displays mean that he remains firmly in Chris Wilder's plans.

It wasn't so long ago that ​Bournemouth's forward line was the envy of most Premier League sides, but those days seem a dark and distant memory for Cherries supporters. Wilson has struggled to find the net this term, and Dominic Solanke's barren spell in front of goal continues to haunt the former Liverpool star. Wilson had only bagged five times this season before the trip to Sheffield, but he claimed his second goal in three games to give Bournemouth a giant boost. Solanke however, extended his run to 21 league games without a goal this campaign, entering the fray with only two minutes left to try and make a difference.

The Cherries' survival hopes hinge on their ability to find the net, and with Wilson back among the goals, Howe may find some crumbs of comfort from their crushing defeat on Sunday afternoon.

Fraser might not be at the Vitality stadium beyond this season, but the Scotsman will continue giving his all for the Cherries until he finally departs. The tricky winger was a constant threat on the Bournemouth left-flank, helping to create the opening goal of the game and carving out several more opportunities in the minutes that followed, as the visitors looked to punish the sloppy Blades. His electric pace frightened the Sheffield backline, and defender George Baldock was forced into committing some hefty fouls to stop the Bournemouth star. Fraser was the perfect outlet for the visitors, who were forced to camp in their own half for long periods of the second-half.

Unfortunately for Fraser, it just wasn't meant to be.

Sheffield United follow up their victory over the Cherries with another home contest against relegation-threatened ​Brighton. ​Burnley