Chris Wilder's side have been the surprise package of the season, and are currently just two points adrift of the top four, and one point off of fifth.

Due to City's FFP sanctions, a fifth place finish looks likely to be enough to earn the Blades' UEFA Champions League qualification.

Meanwhile, this weekend's opponents Brighton are struggling at the bottom end of the table and will be desperate to get something out of the fixture.

​Without further ado, let's get into the preview for this ​Premier League match up.

Remarkably, ​Sheffield United have an entirely clean bill of health.​ That's right, despite the fact the Premier League is heading into the 27th gameweek of the season, Chris Wilder still has a full squad of players to choose from.

And that's not all. The Blades have had time to rest over the two week winter break. Nice one. Brighton aren't quite as fortunate as their hosts. The visitors will still be without Jose Izquierdo who remains sidelined with a long-term knee problem and central midfielder Dale Stephens is a doubt due to a hamstring strain.

Alexis Mac Allister - the Argentine midfielder recalled from a loan spell at Boca Juniors last month - is in contention for his ​Brighton and Premier League debut. If he starts, it will be very exciting for the travelling support as they can finally see their man in action after a year or so of work permit issues.

Historically, there is very little to divide the two teams. In a total of 28 meetings, Sheffield United have just edged it, winning 13 compared to Brighton's nine. There have also been six draws.

Saturday's fixture will be the first time the Blades have ever hosted the Seagulls in a top-flight match. In fact, the last time they met at all at Bramall Lane was all the way back in January 2006; a game the hosts won 3-1. 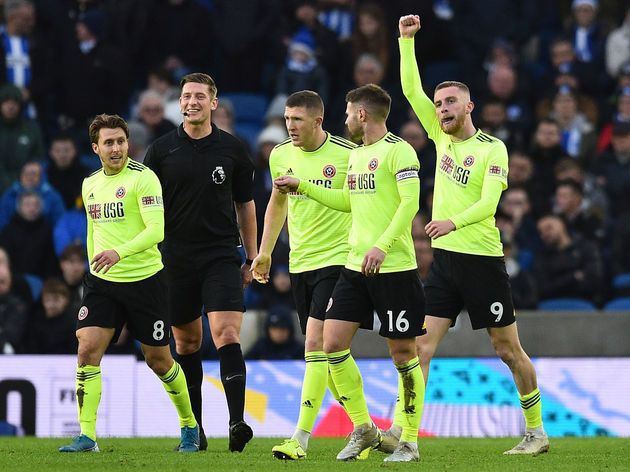 In the reverse fixture in December, Oli McBurnie struck in the first half to give his side an early lead - a lead his side held onto to earn an impressive 1-0 win.

Sheffield United have been awe-inspiring this season and Brighton on the other hand? Well, things haven't quite gone to plan over the last couple of months. Graham Potter has come in and made a difference to Albion's style of play, but the results simply haven't been good enough.

Only keeping a clean sheet in three of their last 18 league fixtures, many supporters have started to doubt the new boss' philosophy. That's understandable too given the fact the Seagulls are yet to win a Premier League match in 2020.

Here's how each side have fared in their last five:

Sheffield United have a real chance of qualifying for the Champions League this season, and will see this game as a must win. Brighton have been struggling to say the least and will be desperate to pick up something from this meeting, but expect nothing less than a Blades win.