The hosts were their typical tenacious selves early on as they made life difficult for the Canaries - Oli McBurnie forcing Tim Krul into a save with a header from Sharp's lofted cross.

It was Teemu Pukki, however, who spurned the best chance of the opening stages as his sliced half-volley hit the outside of Dean Henderson's post from close range. After the visitors started to ease themselves into proceedings, a period of sustained Blades pressure ten minutes from half-time eventually led to the game's opener, as Sharp thumped his header past Krul after meeting a majestic John Lundstram cross.

A change in shape saw Daniel Farke take a brave approach in the second period, which almost immediately yielded results as substitute Josip Drmic saw his headed effort drift wide amid a spell of pressure. An astonishing double save from Henderson later prevented the Canaries from grabbing an equaliser 15 minutes from time. The Euro 2020 hopeful showing immense concentration and tremendous reflexes to keep out Ben Godfrey's header and Drmic's effort from the rebound.

Norwich continued to probe in the final stages, but the home side held on for an imperative victory.

A key principle in Sheffield United's play this season has been the ability to overload the flanks, and it was on full display on this one, especially in the first half. The Blades exposed the high positioning of Emi Buendia and Todd Cantwell to simply overwhelm the Norwich full-backs, with a number of the home side's promising openings coming as a result of a man being spare out wide - Lundstram had time and space on the right to deliver a beauty of a cross for the game's only goal.

Their execution when they got themselves into good positions out wide was superb as well, with the likes of Ollie Norwood, John Fleck and even Jack O'Connell possessing mean crossing abilities. If it wasn't for the brilliant work of Norwich's centre-back pairing, there's no doubting that the Blades would've had the game won by the hour mark.

An important three points for Chris Wilder's men nonetheless, who moved to within two points of the top four.

The Blades skipper continued his fine recent form with a match-winning display against the Canaries.

Billy Sharp comes off to a standing ovation he was fantastic today and loves a goal against Norwich. McGoldrick is on, is he going to do it today???

While his work out of possession and ability to bring others into play was as impressive as ever, the main talking point has to be Sharp's winner - displaying wonderful technique to beat Krul with a thumping header - his third goal in four games.

The Blades icon had run himself into the ground by the time he was brought off for David McGoldrick with 20 minutes remaining, departing to a raucous ovation by the home crowd.

Norwich's wretched away form continued at Bramall Lane, with the Canaries collecting just six points away from home this season (a league-low). Following a first half of barely clinging on to a 1-0 deficit, Farke's change to a 4-3-1-2 saw the visitors fare significantly better in the second period.

The shift saw chief creator Buendia drop into a deeper central midfield position which certainly helped the Argentine get on the ball as much as possible - ensuring the Canaries progressed the ball upfield with more success. Pukki, meanwhile, played in a false nine role while the two young full-backs were given greater licence to roam forward.

Despite the gung-ho approach, Norwich struggled to penetrate the home side's defence, falling to a 1-0 defeat.

First time Sheffield United have done the double over us in decades. Well deserved, worrying lack of variation in our play when chasing. Idah for Duda was needed sooner to give us something different. A golden chance missed each half though, on another day we get a point. #ncfc

If they are to complete the 'Great Escape' this season, their away form has to swiftly improve.

The Norwich skipper was imperious in what was a fine display by the Canaries' centre-back pairing on Saturday afternoon. 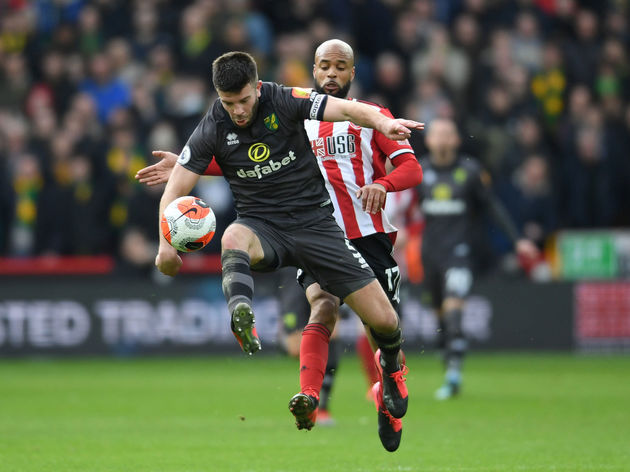 His aggressive nature ensured that Sharp didn't have it all his own way in this one, while his fine anticipation skills saw him sniff out many Sheffield United attacks early on. Along with Godfrey, the duo dealt superbly with what was a barrage of fiercely delivered Blades crosses in the opening period, ensuring his side were in the game up until the final whistle.

As Farke 'went for it' in the second half, Hanley also proved key in dealing with the hosts' threat in transition.

Sheffield United visit Newcastle next Saturday ahead of their FA Cup quarter-final tie at home to Arsenal the following weekend.

Norwich will also be in FA Cup action in two weeks time as they host Manchester United, with a home game against Southampton up next in the Premier League