Thanks for the memories Rob

The 28 year old scored 8 goals in the top flight of English football for the Blades and he made a massive influence on United's relegation scrap in the Premiership. Below we take a look at some of his key times in his United career.

It was the first game of the Premiership season as the Blades kicked-off the top flight campaign in style in front of the Sky Sports cameras. Just a minute after the break Rob Hulse opened the campaign off with a diving header past Pepe Reina in the Reds goal. The Bramall Lane faithful went ballistic though after referee Rob Styles awarded a penalty to Liverpool after Chris Morgan allegedly tripped over Captain Steven Gerrard. Video replays show that it was a dive from the England international. Robbie Fowler stepped up to the spot and calmly slotted past Paddy Kenny to send the Reds home with a disappointing draw but the Blades with a well deserved point.

He's on the score sheet again...
...This time at the JJB where he bags the only goal of the game in a 1:0 victory for the Blades as he turned in Stephen Quinn's cross at the near post. 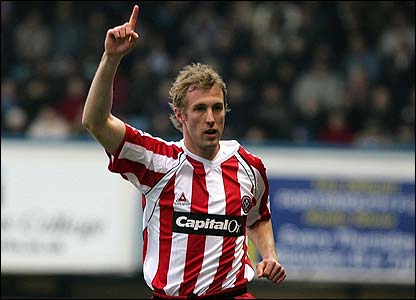 More goals from Rob
He felt like adding some more goals to his increasing tally by putting this one past David James in the Portsmouth goal to score the opening goal of the game at Fratton Park. Despite taking the lead United lost the encounter 3:1. 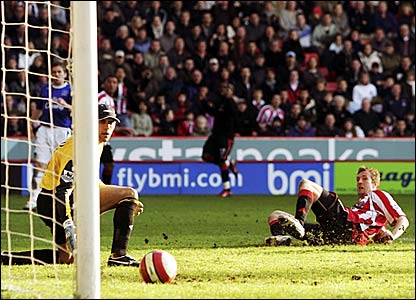 It's in!
Hulse slides the ball past Tim Howard in the Everton goal to give United the lead but a mistake by Paddy Kenny let another Merseyside team go away with a point. The final score was one a piece at the Lane.

Delight!
Hulse gets the Blades equaliser to make it 1:1 against Spurs. Jermaine Jenas gave Tottenham the lead but Hulse's header made the score line level. It got better though when Phil Jagielka blasted his 2nd half penalty down the centre of the goal to wrap up the Blades three points.

After the fabulous season Rob achieved, three quarters the way through of the campaign he suffered a serious injury. In a 3:0 loss to Chelsea at Stamford Bridge Hulse collided with Blues goalie Petr Cech and suffered an horrendous injury when he broke his left leg. At the time Rob said: "For a moment, I thought 'That's it for me'. I knew I'd done something serious straight away."

After all the fantastic memories he provided us through the rollercoaster of a Premiership season he didn't perform to his expected calibre which everyone knows he is capable of. Unfortunately Hulse has had to move on to Derby County after the injury he suffered at Stamford Bridge had a influence on his disappointing performances at the back half of last season.

The best of luck Rob and thanks for the fabulous memories.