L1 Preview: Battle at the Top (and Bottom) 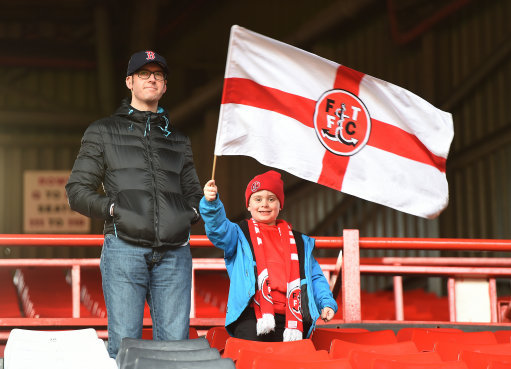 Bolton Wanders are truly in the automatic hot seat as they plan to bounce back to the Championship at the first time of asking. Sheffield United (in case you didn't know) have already won the League One title and will be aiming to finish the season on a high at home to local rivals Chesterfield at a sell-out Bramall Lane tomorrow.

Fleetwood face relegation threatened Port Vale and must win and pray that Bolton lose at home to mid-table Peterborough United. A win for the Trotters would secure promotion regardless of the Cod Army's result, whilst a point would be just enough. Assuming that Fleetwood win and Bolton drawn, the Highbury club would have to win by a clear 9 goal margin.

Either Bolton or Fleetwood will finish in the promotional Play-Offs alongside Scunthorpe United, who were top of the league prior to Christmas and Bradford City.

Millwall had been placed in the top 6 for the majority of the season but poor results in recent weeks has seen the Londoners having to wait until the final day to secure their place. They were beaten finalists twelve months ago (against Barnsley) and will be keen to go one better this time.

However they have been plunged into a 3-way tie alongside Southend United and Rochdale whom look to cause a last day upset. Realistically all three sides need to win their match and pray and the other two sides lose. A point for Southend will only be beneficial if the Lions and Dale lose, this will allow the Shimpers to gain a top six finish by better goal difference. 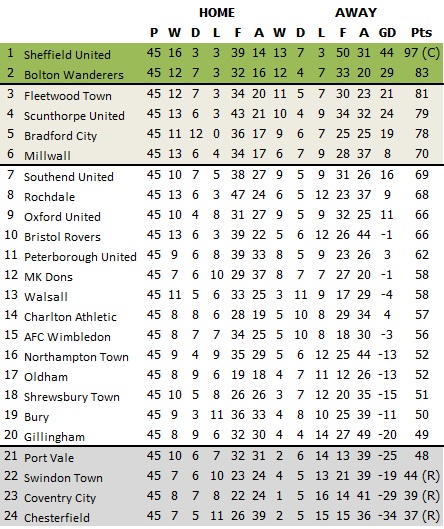 Survival Of The Fittest

Swindon, Coventry and Chesterfield have already sealed their fate and will play League Two football next season. There are four relegation spots up for grabs and one unlucky loser will join the trio in England's bottom tier.

Port Vale are in the driving seat to sink to the lower league but mathematically could save their bacon and send either Gillingham or Bury down instead. A victory at Walsall in midweek saved Michael Brown's Vale from relegation for one more fixture at least. A defeat would have wrapped up the four relegated teams.

Vale have the difficult task of winning at Fleetwood who have a higher purpose in winning their fixture, whilst Gillingham are away at Northampton and Bury at Southend. The Shakers require only a point or better to guarantee their League One status whilst Gillingham must win, draw or match Vale's result.