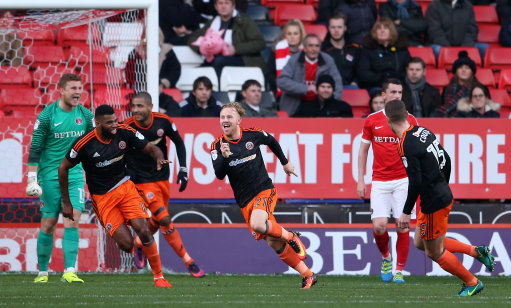 MARK DUFFY CELEBRATES HIS GOAL AT THE VALLEY LAST WEEKEND.

Sheffield United's unbeaten run came to a dramatic end last Tuesday night having gone on an epic 15 league games unbeaten, which included 4 draws. The run started on 27th August with a win over Oxford United (1-0) and was ended by Walsall (0-1).

United and Bolton are toe-to-toe in the League One standings, a win over the Saddlers would have seen the Blades skip to second in the league and be better off by Bolton by just one point. Neither side will be able to make head way in the table this weekend but with both teams doing well, this cup tie is set up for an entertaining fixture.

Skipper Billy Sharp missed a late penalty as Sheffield United's 10-game unbeaten run was halted by Walsall, who defended heroically to nick a 1-0 win at Bramall Lane. Youngster Amadou Bakayoko's 42nd-minute effort proved the difference between the two sides, but United - who had two goals ruled out - should have rescued a point, only to see Sharp's spot-kick saved by Neil Etheridge. Walsall nearly took a 10th-minute lead when Erhun Oztumer's superb free-kick bounced off the bar and away to safety.

United hit back with Leon Clarke narrowly nodding wide, before Jack O'Connell's header from Mark Duffy's corner was kept out by Etheridge and then the defender had an effort cleared off the line. Etheridge got down low to save from Daniel Lafferty, before Walsall took the lead three minutes from the break. Oztumer's superb ball over the top fell right into Bakayoko's path and as Simon Moore rushed out of his area, the youngster stabbed the ball past the United keeper into the empty net.

Walsall almost doubled their lead in the first few seconds of the second half, but Moore acrobatically kept out Oztumer's powerful strike. O'Connell headed home only to see his effort ruled out and Lafferty flicked a volley just over as the Blades sought to get back on level terms. Duffy almost caught Etheridge off guard with a quickly-taken free-kick, but the Philippines international managed to dive across in time and palm his effort wide.

United were handed a lifeline seven minutes from time, when substitute Caolan Lavery's shot was handled by a defender, but Sharp's tame penalty was easily saved by Etheridge. And in stoppage time, United thought they had snatched a point when the ball was forced in after a goalmouth scramble, but it was ruled out for handball.

Sheffield United defender James Wilson could return to contention, while boss Chris Wilder has no major new injury problems. Wilson, sidelined since early October due to an ankle injury, played in a friendly against Oldham on Wednesday and could be added to Wilder's squad. Fellow defender Jake Wright remains doubtful after missing the midweek home defeat to Walsall with a hamstring strain.

Caolan Lavery and Harry Chapman are hoping to be handed starts, while striker Matt Done and midfielder Stefan Scougall are both pushing for recalls. Defender Ethan Ebanks-Landell was refused permission to play in the last round of the FA Cup by parent club Wolves and may be refused permission again.