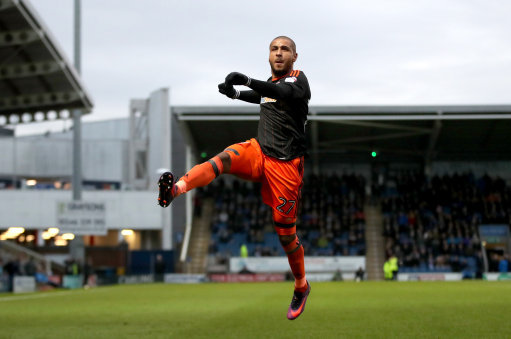 Leon Clarke will be looking to find the target against his former club.

United will be looking to returning to second in the table when they face Coventry tonight. Having completed the 4-0 demolition of Swindon the Blades temporarily jumped to second in the table until Bolton won by the same result at home to Gillingham on Monday night. A win at the Ricoh Arena would see the Blades go joint top with Scunthorpe on 44 points with only goal difference and this weekend's bout of fixtures proving the difference.

Sheffield United continued their promotion push with a 4-0 win over Swindon at Bramall Lane. Mark Duffy bagged a brace while Paul Coutts and substitute Caolan Lavery also scored as the Blades moved second in Sky Bet League One.

The visitors had the better of the opening exchanges but the hosts grew into the game with creative midfielder Duffy at the centre of the action. Level at half-time, United started the second period with greater urgency and were ahead after 52 minutes. Duffy's sliced shot was initially saved by Lawrence Vigouroux, but the goalkeeper spilled the ball and was unable to prevent it crossing the line.

The Blades had a second two minutes later as Duffy laid the ball off for Coutts, who smashed home from 16 yards. Duffy's second and United's third after an hour put the game beyond Swindon, as he slotted past Vigouroux from Billy Sharp's cross. It was 4-0 when substitute Lavery found the far corner from close range in the 77th minute.

Chris Wilder could name an unchanged team for the trip to the midlands following Sheffield United's comprehensive victory over Swindon on Saturday. The Blades boss has no new injury concerns, although he may hand a start to Caolan Lavery after the forward came off the bench to score his first goal for the club against the Robins.

Midfielder Harry Chapman is United's only confirmed absentee after he underwent ankle surgery last week. Striker Leon Clarke and midfielder Stefan Scougall are among the other players hoping for a recall as the South Yorkshire side look to return to the top two.