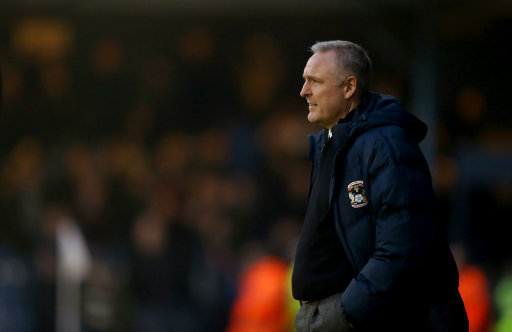 Venus, 49 (pictured) who served as a player for Leicester City, Wolverhampton Wanderers and Ipswich Town has been in temporary charge of Coventry City since Tony Mowbray resigned on 29th September.

The Sky Blues lay in the bottom four and face the prospect of League Two football next season. They last registered a league victory on 1 November (2-0) at home to fellow strugglers Chesterfield. Whilst they have made advancements in the Checkatrade Trophy they have lost five matches since they won against the Spirites, including last Saturday's 3-1 defeat at Southend United.

Southend made it nine Sky Bet League One games unbeaten with a convincing 3-1 win over struggling Coventry at Roots Hall. The Shrimpers went in front after just six minutes when Anthony Wordsworth fired home from 12 yards after a bright burst into the box by Jason Demetriou. The Sky Blues hit back with Southend goalkeeper Mark Oxley doing well to deny both Andy Rose and Daniel Agyei before visiting shot-stopper Lee Burge was forced off injured in the 44th minute after being clattered into by Nile Ranger.

But Southend got back on top after the break and doubled their lead in the 64th minute when Anton Ferdinand volleyed home from close range after being picked out by Ryan Leonard's header from a Wordsworth free-kick. Phil Brown's side made it 3-0 in the 69th minute as Stephen McLaughlin's right-footed shot struck the inside of the left post before hitting the back of substitute goalkeeper Reice Charles-Cook and rolling into the net.

The fortuitous strike heaped further misery on Coventry, who sits in the relegation zone, but they did net a late-minute consolation strike when Agyei scored from close range.

Goalkeeper Lee Burge faces a late fitness test as struggling Coventry prepare to host high-flying Sheffield United in Sky Bet League One. The Sky Blues' number one was forced off following a collision in the first half of the weekend defeat at Southend and back-up keeper Reice Charles-Cook is ready to deputise, if necessary.

Midfielders Chris McCann and Andy Rose, who have both recently returned to action, remain fit, while defender Dion Kelly-Evans is also available after making his comeback from injury against the Shrimpers.

City, who will be attempting to halt a run of five successive league defeats and move out of the relegation zone, will once again be without injured defensive duo Jamie Sterry and Ryan Haynes.