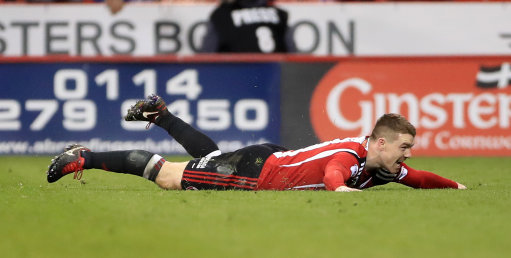 The Blades could have secured promotion on Wednesday night at home to Coventry City, but despite beating the Sky Blues 2-0, they relied on Fleetwood, whom won 3-1, failing to win at Oxford. Tomorrow's fixture at Sixfield's is completely different. A win will result in promotion back to the Championship for the first time in six years regardless of the Cod Army's result at Oldham.

United should pay attention to the score-line with Bolton, who do battle at Scunthorpe tomorrow. The Trotters are 6 points behind the Blades, and either a draw (or defeat) would do nicely as long as United win their game. This would surely all but see United lift the Champions Trophy over the Easter weekend.

Sheffield United had to keep the champagne on ice but they moved closer to promotion with a 2-0 win over Coventry at Bramall Lane. A return to the Championship could have been secured if results went their way and second-half goals from Leon Clarke and John Fleck kept up United's side of the bargain. But Fleetwood's win at Oxford means Chris Wilder's men will have to wait until they visit Northampton on Saturday - Wilder's former club - to seal their return to the second tier.

The Blades, who are now unbeaten in 12, were not at their best in the first half, but they should have led in the 23rd minute when James Hanson was presented with a fine chance which he embarrassingly blazed over. After Ruben Lameiras missed an equally good chance to steal the lead for Coventry when he shot straight at Simon Moore early in the second half, United clinched the game with two goals in five minutes.

Clarke broke the deadlock in the 70th minute when he converted Fleck's cross from close range and then Fleck made the game safe with a fine solo goal, stroking home from 18 yards after a surging run to leave Coventry perilously close to leaving the division at the other end.

Ethan Ebanks-Landell is set to return for the Blades as they look to secure promotion back to the Championship. Chris Wilder's men need one more win to secure a return to the second division following a 2-0 victory over Coventry on Wednesday.

Ebanks-Landell has missed the last two games with an ankle injury but Wilder expects the on-loan Wolves defender to return, although he may have to settle for a place on the bench. Leon Clarke is pushing for a recall after opening the scoring off the bench during the week, while Caolan Lavery is still to return after picking up a knock against Oldham.

The Cobblers currently find themselves in mid-table obscurity. Under boss Justin Edinburgh, who was appointed in mid-January, they have recorded two draws in their last three matches and are without a win since 14th March. Securing their League One status for next season shouldn't be an issue but they will try to halt United's opportunity to claim three points.

Paul Anderson rescued a point for Northampton with a stoppage-time equaliser in a 1-1 draw at Rochdale. The first half was forgettable fare with neither side showing the quality or ambition to carve out a genuine opening.

The best half-chance fell to Nathaniel Mendez-Laing just before the break when he was played in by Steven Davies, but David Buchanan rescued the Cobblers, putting Mendez-Laing off his stride as he shaped to shoot. In a low-key affair of few chances, the home side looked to have secured the points when Mendez-Laing curled home a neat finish from the edge of the area in the 57th minute.

Anderson sent a side-footed attempt narrowly wide of Conrad Logan's post and went even closer minutes later when his firm header towards the roof of the net was palmed away by the Dale goalkeeper. But Anderson raced onto a hopeful punt up field by Adam Smith and lifted the ball over a stranded Logan to give the visitors a draw three minutes into time added on.

Northampton have no fresh injury worries ahead of meeting promotion-chasing Sheffield United at Sixfields on Saturday. The Cobblers hope to have on-loan striker Luke Williams available after recovering from a hamstring problem. Alex Revell (calf) could also return to action having been sidelined with injury. Justin Edinburgh's side are looking to end a three-game winless run.