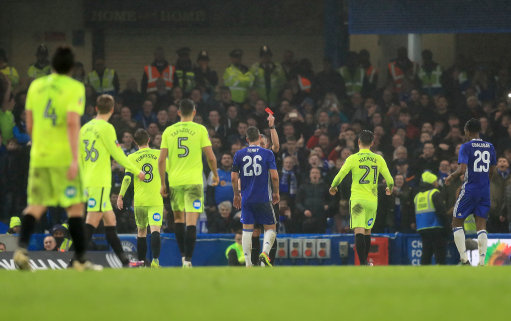 The Blades ended a three game drought with a fine victory over AFC Wimbledon in their first ever visit to Bramall Lane since their formation. United had previously suffered defeats to Walsall (1-4) and Fleetwood Town (0-2). This was sandwiched between a 2-2 home draw with Gillingham. The victory was enough to see Sheffield United return to the top of the table.

A goal from debutant James Hanson helped Sheffield United return to the top of the Sky Bet League One table with an emphatic 4-0 victory over AFC Wimbledon. The former Bradford centre-forward opened his account for the Blades after Billy Sharp had earlier netted his 19th goal of the campaign. John Fleck and substitute Caolan Lavery piled on the misery for Neal Ardley's side with strikes after the interval.

When Sharp opened the scoring after three minutes, AFC Wimbledon must have feared the worst. But even though Hanson extended United's lead during the closing stages of the first half, the visitors remained a threat.

Although Dons keeper James Shea will have been disappointed with his handling for Sharp's opener, parrying Fleck's cross straight into the United captain's path, he was powerless to prevent Hanson netting in the 38th minute. On that occasion, Kieron Freeman was the provider before Sharp missed a flurry of chances early in the second period.

United need not have worried though, as Fleck made it 3-0 with a delightful piece of skill with 10 minutes remaining. Lavery then completed the rout deep into stoppage time as the Blades moved two points clear of Scunthorpe, who lost at Southend.

Sheffield United defender Ethan Ebanks-Landell is hoping to shake off a hip injury in time to feature. Ebanks-Landell, on loan from Wolves, aggravated an ongoing problem before being withdrawn from last week's home win against AFC Wimbledon and replacement Chris Basham is on standby.

Striker Leon Clarke remains doubtful due to an ankle injury that has hindered his progress since arriving at Bramall Lane in the summer, so James Hanson may continue after his goalscoring debut last week. Boss Chris Wilder has no other major new injury worries as his side bid to stay top, while recent signings Joe Riley and Jay O'Shea are hoping to make their debuts.

Eighth placed Peterborough put an end to a two match streak with a convincing 3-0 victory at Port Vale last weekend. They had previously recorded back to back defeats to MK Dons (0-4) and Oldham Athletic. The Posh had beaten Swindon (1-0) on 21st January - putting an end to a four match streak without a league victory.

Two goals from substitute Junior Morias helped Peterborough United to a hard fought 3-0 win over Port Vale. The striker scored two stoppage-time goals, after Marcus Maddison had given the visitors the lead, to help Posh avoid a third consecutive league defeat. After an even start, Peterborough took the lead after 20 minutes when Maddison cut in from the right-hand side and curled the ball past Leonardo Fasan.

And it was the Vale keeper, making his debut after joining on loan from Celtic, who had kept the scores level a minute earlier, denying Maddison from the spot after Callum Guy fouled Tom Nichols. Despite coming under heavy second-half pressure as the home side pressed for an equaliser, Morias made sure of victory in the first minute of stoppage time, burying the ball into the bottom corner. And five minutes later, the 21-year-old Jamaican added gloss to the result when Maddison played him through following a Peterborough break and he slotted past Fasan.

Peterborough manager Grant McCann has no fresh injury or suspension concerns ahead of the Sky Bet League One clash with Sheffield United. Michael Bostwick (broken jaw), Jack Baldwin, Jermaine Anderson, Harry Anderson (all knee) and Chris Forrester are all recovering from injury. There is a slight possibility that centre-back Baldwin could be involved but McCann will not risk him unless necessary.

Junior Morias, who came off the bench to score two goals in the 3-0 win over Port Vale last weekend, is pushing for a place in the starting XI.