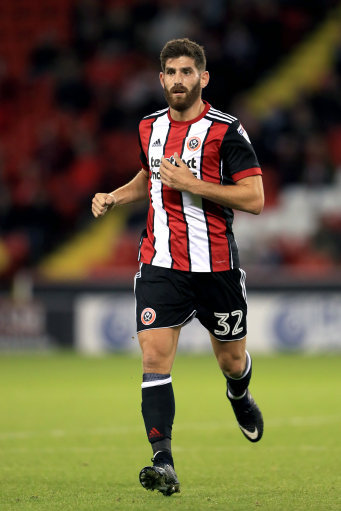 Chris Wilder's Blades got off to a great start on the opening day of the season, beating Brentford 1-0 with the aid of a Billy Sharp goal. Since then it hasn't gone to plan, losing away fixtures at Middlesbrough (0-1), live on Sky, and at Neil Warnock's Cardiff City (0-2) on Tuesday night.

Sheffield United defender Richard Stearman is an injury doubt for the home game against derby rivals Barnsley. Stearman was forced out of the midweek defeat at Cardiff due to a hamstring injury and was replaced by Jake Wright, who could make his first league start of the season.

Striker Ched Evans (pictured) is pushing for his first full 90 minutes since returning to Bramall Lane and midfielder David Brooks is also in contention for his full league debut. Summer signing George Baldock (foot) and striker James Hanson (thigh) are expected to miss out again.

Barnsley's start to the 2017-18 campaign saw the Reds lose their opening two league fixtures. Bristol City were 3-0 up before the break, and eventually won 3-1, whilst (despite taking the lead), they lost their first home fixture at home to Ipswich Town (1-2). Last Tuesday night they claimed their first victory of the new season, beating Nottingham Forest 2-1.

Barnsley are not expecting to receive international clearance in time to include latest signing Dimitri Cavare in their squad. The Reds paid an undisclosed fee for former Rennes full-back Cavare, who agreed a two-year deal on Thursday.

But defender Andy Yiadom could be back in contention. His expected move to Huddersfield broke down earlier this week and he has returned to Oakwell. Teenage midfielder Jared Bird stepped off the bench to make his debut for the club in the midweek home win against Nottingham Forest, while head coach Paul Heckingbottom has no new injury worries.