Bramall Lane will be looking forward to another bumper crowd when Sheffield United host promotion rivals Bolton Wanderers today (3:00PM). Almost 28,000 were in attendance as top of the table Blades drew 1-1 with second placed Scunthorpe United. The result kept United five points clear at the top - although the Iron have a game in hand.

Billy Sharp rescued a point for Sheffield United as they drew 1-1 at home against promotion rivals Scunthorpe. Paddy Madden opened the scoring early in the second half for the visitors, who had Harry Toffolo sent off, but the Blades responded quickly through Sharp's close-range volley. The home side started well as Sharp fired just over the crossbar after Daniel Lafferty's ball in from the left and then Mark Duffy struck wide after a neat give and go with Sharp in the box.

Scunthorpe took the lead through Madden in the 47th minute after Stephen Dawson broke into the penalty area and crossed for the unmarked striker to tap in. The Blades were soon back on level terms though as Sharp volleyed the ball home from inside the six-yard box two minutes later.

In the 51st minute Scunthorpe's Toffolo was shown a straight red card for a wild challenge on Kieron Freeman. The home side piled on the pressure as John Fleck's 25-yard effort flew over and substitute Caolan Lavery's shot was parried away. Madden thought he had won it for Scunthorpe in the 87th minute, but his close-range effort rebounded off a post and Blades substitute Jay O'Shea's last-minute curling effort also hit a post.

Sheffield United will be without Joe Riley for their home game against Bolton after the defender dislocated his shoulder. Riley, on loan from Manchester United, sustained the injury in training this week and is awaiting scan results back at his parent club to learn whether his season is over.

Boss Chris Wilder has no other new injury problems but is expected to make changes again after regularly rotating his squad this season. Striker Leon Clarke (ankle) is still out, while on-loan Wolves defender Ethan Ebanks-Landell, midfielder Samir Carruthers, winger Jay O'Shea and striker Matty Done are all pushing for recalls. 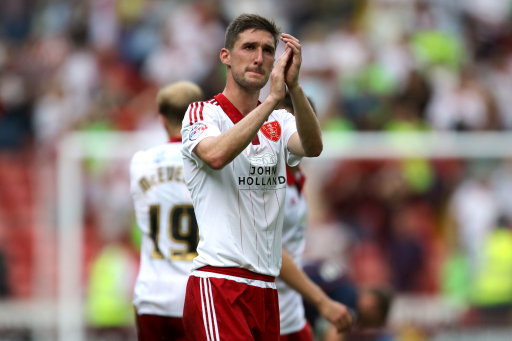 Chris Basham will be looking to upset Bolton when he faces his former club today.

Third placed Bolton will no doubt be looking to cause an upset, and will deem themselves to have the upper hand having already beaten United twice, firstly on the opening day of the season (0-1) and in the FA Cup Second Round (2-3), both were at the Macron Stadium. The Trotters lay 7 points behind the leaders and with two games in hand will be looking to close the gap

However their form in the last 6 matches has been pretty even with two wins and two draws. They are unbeaten in for matches having drawn at MK Dons (1-1) and in their last match at Bradford City (2-2). This is sandwiched between victories over Walsall (4-1) and Rochdale (1-0).

Gary Madine netted a 74th-minute equaliser to earn Bolton an unlikely 2-2 draw with Bradford and prevent former Bantams boss Phil Parkinson from tasting defeat on his return to Valley Parade. The 49-year-old, who led City to the League Cup final and promotion to League One during a near five-year spell in charge which ended last June, was enduring a miserable afternoon when his rattled side conceded two goals to Charlie Wyke inside the first 16 minutes.

But David Wheater and Madine netted in the second half to earn the automatic-promotion chasers a precious point following a poor display for an hour. Wyke profited from two errors from Bolton goalkeeper Ben Alnwick to take his tally to three goals in four games since signing from Carlisle. Alnwick failed to keep out Wyke's low left-footed effort and then, having raced to the edge of his area, was lobbed by Nicky Law to allow the prolific striker a simple tap-in.

Madine missed two chances to halve the deficit but, after Wheater lashed home in the 62nd minute following poor defending, the former Sheffield Wednesday striker silenced the hostile crowd by heading home 12 minutes later. Bradford almost won it late on only for substitute Timothee Dieng's shot to cannon back off a post.

Chris Long remains a doubt for Bolton when they make the trip. Boss Phil Parkinson said the forward, who missed out against Bradford with a hamstring problem, was "making good progress", though this fixture may come too soon. The Burnley loanee will be assessed on Friday, as will Andrew Taylor - the defender having returned to full training on Thursday after a hamstring problem of his own.

New signing Reece Wabara and goalkeeper Mark Howard (hand) played for the development squad earlier in the week and are close to being involved in the first team, but Jay Spearing remains suspended.