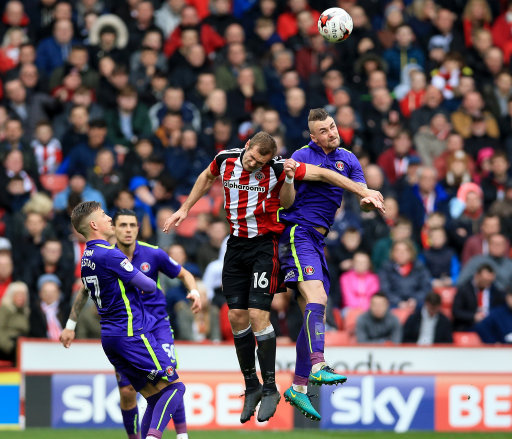 James Hanson could return against his former club

Sheffield United have already been crowned League One Champions, following yesterday's for Bolton (at Oldham). The Blades have accumulated a 12 point gap between themselves and the Trotters with just three games remaining.

Blades boss Chris Wilder is making it his mission to attempt to reach the 100 points tally come the end of the season. This can only be achieved if the Blades win all of their remaining fixtures against Bradford City, MK Dons (a) and Chesterfield (h). They moved one step closer to reaching that target with a 3-0 victory at Port Vale on Good Friday, stretching their unbeaten run to 14 league matches.

Already-promoted Sheffield United took a huge step towards securing the Sky Bet League One title as they ran out 3-0 winners at Port Vale. First-half goals from Jay O'Shea and Leon Clarke sent the Blades on their way to victory before Matt Done added the third in stoppage time. The Blades will be crowned champions should Bolton fail to win at Oldham, but the result leaves Vale in the drop zone and a point from safety.

The visitors got off to a flying start, scoring after two minutes when Chris Basham's pass found O'Shea whose low shot beat Deniz Mehmet from a tight angle. Basham was again the provider on the half-hour mark when his cross found Clarke, who rifled a splendid volley into the roof of the net from just inside the box. Clarke almost had a second after 49 minutes when he raced clear after latching onto a poor back pass, but was denied by Mehmet.

Sheffield United manager Chris Wilder expects to have James Hanson available to face his former club Bradford on Monday. Hanson, who made the move from Valley Parade to Bramall Lane in January, missed the 3-0 win over Port Vale on Friday due to a calf injury. However, that was deemed a precautionary measure and Hanson is due to return to the squad in time to celebrate winning the League One title.

The Blades were confirmed as champions after Bolton lost to Oldham, but Wilder believes his side have an obligation to others in the division to give everything in their remaining matches.

Fourth placed Bradford City will be looking to make a final dash into stealing second spot away from Bolton Wanderers. With just three matches remaining they will have edge the four point gap and better Fleetwood's results.

A Play-Off place looks likely but they travel to Bramall Lane tomorrow in good form with just one defeat in eleven matches, and have won their previous three matches on the trot. They all but surely cemented their place in the top six with a 1-0 victory at home to Oxford United on Good Friday.

Bradford took another step towards the Sky Bet League One play-offs with a nervy 1-0 win over Oxford. Nicky Law scored the winner in the 59th minute on his first start since February following a lay-off with a knee injury.

The visitors failed to deal with a left-wing cross from Mark Marshall and Law poked the ball into the net when Charlie Wyke's glancing header landed into his path. The result leaves fourth-placed Bradford six points ahead of seventh-placed Southend, but they had little to spare against hard-working Oxford.

Conor McAleny, on loan from Everton, posed the most danger, forcing diving saves from Bradford keeper Colin Doyle as the visitors made a determined bid for an equaliser. But Simon Eastwood also had to be at his best to keep out second-half efforts from Wyke and did well to block a close-range header from defender Nathaniel Knight-Percival in the 15th minute.

Bradford boss Stuart McCall knows his side must ignore the party atmosphere at Bramall Lane and focus on their own promotion push. McCall is not expected to face any new injury worries, but could still make changes for the Bantams' second game in four days.

Stephen Darby, Timothee Dieng, Alex Jones and Billy Clarke are possible options after starting the win over Oxford on the bench, with Darby, Dieng and Clarke all coming on during the 1-0 victory. Alex Gilliead (hamstring), Matthew Kilgallon (shoulder) and Reece Webb-Foster (knee) all remain out, although there is hope that Gilliead could return for City before the end of the regular league season.