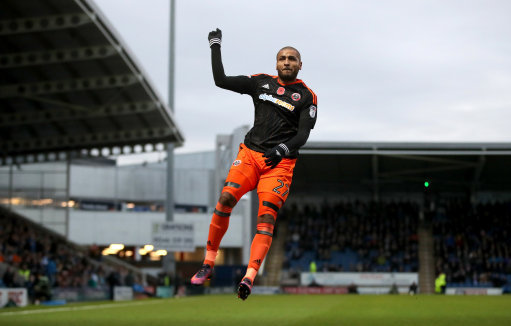 Former Bury striker Leon Clarke will be looking to find the net against his former club.

Some things don't go on forever, and there will be a time when united loses their unbeaten run, but to date the Blades have stretched their tally to 13 league games unbeaten having disposed of Shrewsbury Town last Saturday. The only disappointing earmark would be not scoring more goals against nine men but Bradford's defeat at Southend saw the Blades jump into second spot.

Goals from Billy Sharp and Stefan Scougall gave Sheffield United a 2-1 victory over nine-man Shrewsbury that lifted them into the automatic promotion places. Louis Dodds scored for the visitors during a fiery encounter at Bramall Lane in which Jim O'Brien and Abu Ogogo were sent off. United took the lead in the eighth minute as Sharp collected a neat through ball from John Fleck and slotted the ball into the net.

Shrewsbury were reduced to 10 men in the 22nd minute after O'Brien fouled Daniel Lafferty in the box Sharp saw his penalty saved by Mark Halstead, however. United doubled their lead minutes later, as substitute Scougall stabbed home from inside the area. With just seconds remaining in the first half, Ogogo was shown a red card for a high studs-up tackle on United's Paul Coutts.

Sheffield United trio Mark Duffy, Kieron Freeman and Paul Coutts are all doubtful for the home game against Bury. Winger Duffy (calf), Freeman (back) and fellow midfielder Coutts (leg) were all forced out of Saturday's home win against Shrewsbury and will be assessed. Defenders Chris Hussey and James Wilson are back in full training following their respective injuries and could return to contention.

The Blades moved into the second automatic promotion place at the weekend and are chasing a sixth straight win in all competitions.

Chris Brass will take charge of Bury again, despite being unable to inspire an immediate turnaround in fortunes at the weekend. Brass oversaw a 5-1 loss at AFC Wimbledon, four days after a Shakers team led by David Flitcroft had lost 5-0 at the same venue in the FA Cup, and the interim boss will remain in temporary charge while chairman Stewart Day takes stock.

Defender Niall Maher came into Brass' starting XI, only to pick up a suspension-incurring fifth caution of the term, while Tom Walker missed out with a knee injury, joining Nathan Cameron (knee), Kean Bryan (thigh), Ishmael Miller (hamstring) and Chris Brown (knee) on the sidelines.

Kelvin Etuhu (fibula) was back on the bench at the weekend, Craig Jones (thigh) travelled with the team and Tom Pope (ribs) came on, though Brass is reluctant to start him just yet.