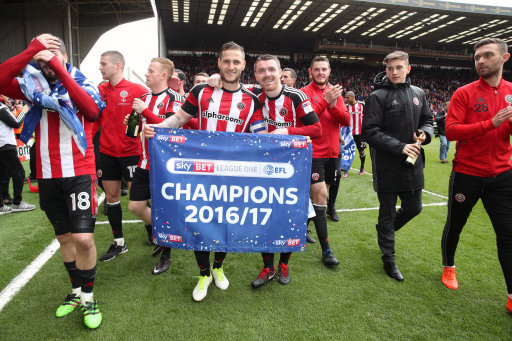 A sell-out Bramall Lane is expected to roar on the League One Champions Sheffield United as they make the final push towards securing a 100 points tally. The Blades come into this fixture 16 league games unbeaten, and in their last three fixtures have beaten Port Vale, Bradford City and Milton Keynes Dons - all 3-0. Can they do it again at home to Chesterfield?

Billy Sharp scored twice as League One champions Sheffield United recorded their sixth successive league victory with a comfortable 3-0 win over MK Dons. Sharp's goals in the second half came after strike partner Leon Clarke had put the visitors ahead before the break, and it was a lead that never looked like being challenged by the mid-table Dons.

Backed by over 7,000 travelling fans, United started on the front foot and should have taken the lead through Sharp inside nine minutes, but his effort smacked against the post following good work from Chris Basham. Chris Wilder's team went ahead on the stroke of half-time, though, as Clarke rose highest to head home from John Fleck's inviting corner. And Sharp added a brace for the Blades in the second half after confusion in the Dons defence twice saw the forward race through on goal before firing home.

Sky Bet League One champions Sheffield United are hoping to have a fully-fit squad to choose from for their final match of the season against relegated Chesterfield. Defender Jake Wright was ruled out of last weekend's victory over MK Dons on the eve of the match through illness but is expected to have recovered.

James Wilson impressed in his place, though, and could keep his spot in the team. Striker James Hanson has missed the last three matches with a calf injury but should be fit to return. 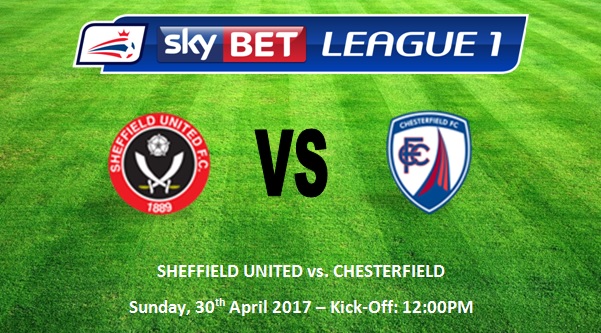 With three consecutive defeats the Spirites sit at the foot of the table and unfortunately their fate is already sealed. A victory could see Coventry handed the wooden spoon but League Two football will be played at the Proact Stadium next season regardless.

Chesterfield set an unwanted club record when they were beaten 2-1 at home by Charlton. The already-relegated club slumped to a 26th Sky Bet League One defeat of the season through goals from Jake Forster-Caskey and Ricky Holmes. Reece Mitchell replied in stoppage time for bottom-placed Chesterfield before Forster-Caskey had a penalty saved.

Chesterfield needed a fine save by Thorsten Stuckmann in the 16th minute to keep out a Holmes free-kick from just outside the box. Joe Rowley almost gave Chesterfield the lead in the 35th minute but two minutes later, Charlton scored when Forster-Caskey was given too much time to fire a 20-yard shot into the bottom-left corner.

Chesterfield should have equalised in the 47th minute when Kristian Dennis robbed Ezri Konsa but blazed over from 12 yards and Charlton took advantage when Holmes' free-kick was deflected past Stuckmann in the 57th minute. Dennis rattled the bar in the 74th minute and Mitchell converted a rebound before Forster-Caskey's last-gasp penalty was saved after he was fouled by Jon Nolan.

Rai Simons could be back in the Chesterfield squad after the forward missed the home defeat to Charlton through injury. With the Blues set for League Two football next season, manager Gary Caldwell will likely continue to involve some of the club's young players. Striker Joe Rowley has played in recent matches and he could be joined in the squad by midfielders Charlie Wakefield and Jack Brownell.

With Ched Evans the subject of transfer interest from the Blades, the striker is unlikely to feature. He has been sidelined by injury for several weeks anyway. Captain Ian Evatt remains out with a knee problem as Chesterfield look to play the role of unlikely party poopers at Bramall Lane.