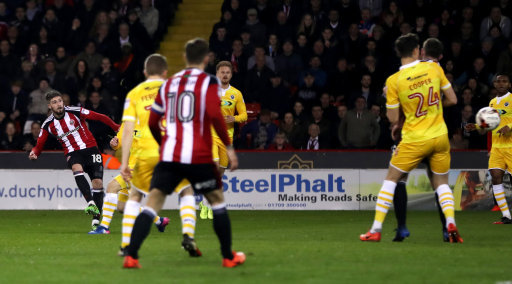 Sheffield United's fate could be all but virtually sealed tomorrow night should they be victorious against Coventry, and Fleetwood fail to win their match at Oxford (also tomorrow). There is currently a 13 point gap between us and 3rd placed Cod Army, and this scenario would ensure the Blades are promoted back into the Championship after a 6 year wait.

Jack O'Connell and Kieron Freeman scored in either half as Sheffield United extended their lead at the top of League One to seven points with a 2-0 victory over Millwall. O'Connell struck in the 16th minute, finding the net with a header after meeting a John Fleck cross. Paul Coutts went close to adding a second soon after when his drive was tipped over by goalkeeper Jordan Archer.\

There was a change in goal for Millwall in the 26th minute when the injured Archer was taken off after receiving treatment and replaced by Tom King. United striker James Hanson then headed wide from a Fleck cross.

Early in the second half, a free-kick from Millwall's Jed Wallace was comfortably saved by Simon Moore. Freeman then increased the home side's lead after 55 minutes with a low finish from inside the area. As Millwall looked for a way back, Ben Thompson had a long-range effort saved by Moore and Lee Gregory headed over. Gregory also shot wide after being put through by Wallace as Millwall failed to get on the score sheet.

Sheffield United boss Chris Wilder will hope to have striker Caolan Lavery back in action as the Blades prepare to host Coventry and aim to extend their unbeaten run in Sky Bet League One. Lavery missed their 2-0 victory over Millwall due to a knock suffered against Oldham but could be available on Wednesday as the Blades play the first of four games during a hectic Easter schedule.

Leon Clarke, Stefan Scougall and Marc McNulty are all pushing for starts while Wolves loanee Ethan Ebanks-Landell is doubtful after missing last week's game with an ankle injury. A victory against the Sky Blues combined with a Fleetwood defeat at Oxford would see Wilder's side seal promotion to the Sky Bet Championship in midweek.

Coventry's life in League One looks destined to take a dramatic twist in the next few weeks. They were relegated from the Premier League in 2000 and since then have made a slow decline, and look set to become one of a few clubs to have plummeted into the basement tier after once residing in the top flight.

At the time of writing the Sky Blues are rock bottom of the league, and 13 points from safety with just 18 points (maximum) left to play for. However they have had a mini revival and have won their last two league outings at home to Port Vale (2-1) and Bristol Rovers (1-0), as well as being successful in the final of the Checkatrade Trophy, beating Oxford United by two goals to one.

Gael Bigirimana grabbed a Wembley goal, hours after becoming a father, and academy graduate George Thomas struck in the second half for the Sky Blues. Substitute Liam Sercombe pulled one back for Oxford but they were condemned to defeat in the final for the second year running. Bigirimana's goal capped a memorable weekend for the 23-year-old after his wife Natalia gave birth to a baby girl in the early hours of Saturday morning. And Coventry's victory provided a bright spot to an otherwise dark season for the troubled Sky Blues, who look certain to be relegated to League Two.

They have had four managers this term, lie in their worst position for nearly 50 years and have seen attendances plummet and supporters protesting against owners Sisu. But more than 40,000 fans forgot about the problems for 90 minutes and enjoyed the party on their first trip to Wembley for 30 years. The competition has been derided for the inclusion of Premier League and Championship under-21 sides for the first time, and quite what the attendance would have been had Reading's youngsters met West Brom's in the final is anyone's guess.

Mercifully two senior teams made the final and a bumper crowd of 74,434 basked in the London sunshine. Coventry, led out by 1987 FA Cup final winning goalkeeper Steve Ogrizovic, went ahead when Jordan Willis floated in a cross which was met on the volley by Stuart Beavon. U's defender Chey Dunkley blocked the shot but t the ball fell kindly for Bigirimana, who swept past keeper Simon Eastwood and into the corner.

Rob Hall stabbed Oxford's best chance of the first half wide, and 10 minutes after the break Thomas doubled City's lead. The 20-year-old winger controlled Kyel Reid's cross with a superb first touch before volleying home with his second. With 15 minutes left substitute Sercombe fired through a sea of bodies and into the corner to raise hopes of an Oxford comeback. They should have been level when Hall raced through one-on-one with Lee Burge but he shot too close to the keeper. And in a frantic finish Burge saved from Josh Ruffels and Bigirimana cleared Phil Edwards' follow-up off the line to secure a deserved victory.

Midfielder Callum Reilly is likely to miss out for Coventry after tweaking a hamstring in training last week. Striker Kwame Thomas is unavailable with a groin strain while Jordan Willis may be a doubt after being forced off with an apparent injury during their Checkatrade Trophy triumph over Oxford at Wembley.

Sky Blues boss Mark Robins could be forced to make changes, with a number of players suffering from tiredness after the turnaround from Sunday's win. Forward Marcus Tudgay may be drafted into the starting line-up after coming on as a late substitute at Wembley.