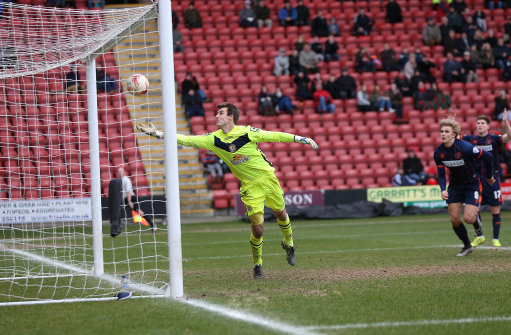 Last season, under the stewardship of Nigel Clough, Sheffield United lost by two goals to one on 28th March - almost a year to the day! Jason Holt had cancelled out Lauri Dalla Valle's first half opener before Ryan Colclough netted in the final minute to steal all three points. Having already beaten the Blades at Gresty Road earlier in the season, the Alex will be looking to complete the double for the very first time over United.

As expected, this season has seen the Cheshire side face a relegation battle and currently sit 23rd in the table and 8 points behind Blackpool in 20th place. With nine games remaining it may prove to be a struggle that will ultimately end in League Two football next season but despite losing their last two matches, had recently put up a fight with four draws from their last eight matches. There last victory came against Rochdale (2-0) on 6 February.

They lost their last fixture at home to Blackpool (2-1), a vital match where three points was a must. Back to back victories at Bramall Lane and at home to Bradford City over the Easter weekend would put them in good stead, but as each games goes on without a win, a place in England's fourth tier looms ever so closer.

Brad Inman missed a last-minute penalty for Crewe as 10-man Blackpool held on for a 2-1 win at Gresty Road - their first victory in nine games. Jack Redshaw headed the Seasiders into the lead but was sent off five minutes later leaving his side to play with 10 men for more than half the game. Relegation rivals Crewe levelled late on through Marcus Haber but Tom Aldred put Blackpool ahead again before Inman missed from the spot.

Both defences looked far from secure and Inman should have made it count after he was left in the clear but blasted against goalkeeper Colin Doyle's legs. Blackpool were ahead in the 34th minute when Jim McAlister headed Danny Philliskirk's cross against the crossbar and Redshaw followed up. But within three minutes the scorer turned from saint to sinner with a high lunge on David Fox earning him his second yellow card, having been booked earlier for his goal celebration.

Zoumana Bakayogo's thumping header from a corner crashed onto the bar and the defender glanced the far post with another effort, while Blackpool's Brad Potts was also denied by the woodwork and Philliskirk blazed over. It looked to have proved costly as Haber levelled with a near-post flick on Oliver Turton's cross in the 83rd minute. But defender Aldred restored Blackpool's lead when his deflected shot carried over goalkeeper Ben Garratt a minute later. Crewe spurned the chance to salvage a point when Inman drove over a last-gasp penalty after sub Tom Hitchock had been tripped by Potts.

Owing to the potential relegation threat, Crewe have bolstered their attacking options with the capture of 19 year old Daniel Udoh from non-league Ilkeston FC on a two year deal and could make his first team debut at the Lane. Last season's hero Lauri Dalla Valle (ankle) returned to the substitute’s bench in the defeat against Blackpool having been absent through injury since last November. Meanwhile, Callum Saunders (knee) and Ryan Wintle (foot) remain unavailable.