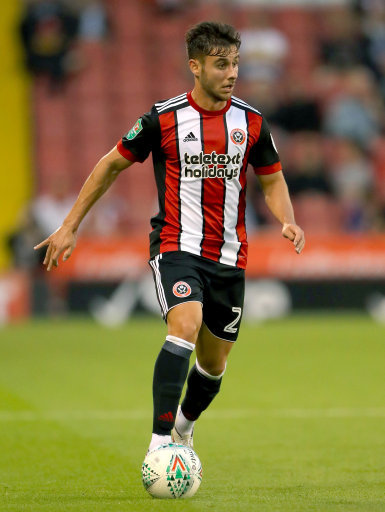 George Baldock - Impressed on his debut against Leicester, and may be in line for a recall against Derby County.

Sheffield United were eliminated from the Carabao Cup on Tuesday night, losing 4-1 at home to Premiership Leicester City. Blades boss Chris Wilder had made eight changes from the starting XI which had beaten Barnsley 1-0 the previous Saturday. Due to limited defensive options Jake Wright, Keiron Freeman (formerly with Derby County) and Jack O'Connell were the only retained players from the victory over the Reds.

Striker Leon Clarke will miss Sheffield United's Sky Bet Championship showdown with Derby through suspension. Clarke was sent off following an off-the-ball incident with Barnsley defender Angus MacDonald during last weekend's South Yorkshire derby and will serve the second instalment of his ban after sitting out the Carabao Cup clash with Leicester in midweek. He will also miss the trip to Sunderland on 9th September and be made available for selection three days later for the trip to Bolton Wanderers.

Ched Evans got the nod against the Foxes, while Caolan Lavery scored the Blades' goal in a 4-1 defeat, although neither is certain of earning another start alongside skipper Billy Sharp in Clarke's absence. Central defender Richard Stearman is sidelined for up to eight weeks with a hamstring injury, while striker James Hanson has been nursing a thigh strain.

Derby County come to Bramall Lane in fine form, having won their last three League and Cup outings. They lay 8th in the table and are just one point better off than the Blades. The Rams start to the season began with a 1-1 draw at Sunderland before registering a 2-0 defeat at home to Wolves. Since then they have claimed back to back victories over Preston (1-0) and Bolton (2-1), and was victorious at Blundell Park (1-0) in the re-arranged First Round tie at Grimsby Town last Tuesday night.

Johnny Russell is an injury doubt for Derby as they prepare to head to the Steel City. The winger suffered a groin injury in the win at Bolton last weekend and is being assessed after undergoing a scan. Should he miss out, Tom Lawrence is expected to come into the team and make his full Championship debut for the club.

Rams boss Gary Rowett made 10 changes against Grimsby in the League Cup and wholesale changes are expected once more as he reverts back to something resembling the side that started at Bolton. Jason Shackell played the full match in midweek on his return from a back injury and the defender will hope to remain involved by taking a place on the bench. Midfielder George Thorne (hamstring) is also nearing a return to the first-team squad.