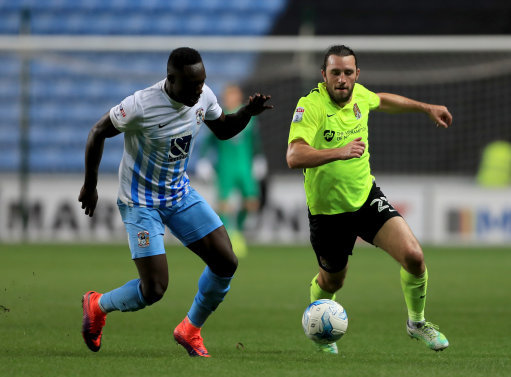 The Blades will end 2016 with a fixture at home to Northampton Town. The last time these two teams met in the league was for a Third Division match in September 1988 with the Blades winning 4-0 - an identical result wouldn't go a-miss as United forge a promotion charge.

United come into this fixture in fine form with just one defeat in 19 league matches and have won their last three consecutive games - scoring eight goals. They were victorious on Boxing Day when they beat bottom of the table Oldham Athletic by two goals to nil. A win today could send the Blades top of the league.

Two second-half goals from Billy Sharp gave high-flying Sheffield United a 2-0 victory over struggling Oldham. In a first half of few chances, Oldham's Ryan Flynn had a 20-yard shot turned over the bar by Simon Moore while the home side's best effort came from Mark Duffy whose free-kick was saved by Connor Ripley. Sharp saw his header deflected wide and Kieron Freeman had a shot blocked.

Soon after the restart, Duffy also had an effort blocked while Sharp tried a first-time shot from inside the area which went over. Oldham's Josh Law floated a free-kick just over before the hosts took control of the game. Sharp produced an emphatic finish on 72 minutes after receiving the ball from Duffy on the right-hand side of the area.

Oldham substitute Freddie Ladapo went close to equalising when his 25-yard volley forced Moore to tip the ball wide. But Sharp added a second two minutes from time to wrap up the points for the Blades, sweeping home the loose ball after Leon Clarke put Ripley under pressure from Duffy's cross.

Sheffield United pair Stefan Scougall and James Wilson were both hoping to prove their fitness in time for the home game against Oldham. Midfielder Scougall the win at Coventry due to a hamstring strain but was included as a substitute against the Latics, while defender Wilson, whose last league appearance was in early September, has been sidelined with an ankle injury.

On-loan winger Harry Chapman returned to parent club Middlesbrough earlier this month and will be sidelined for up to four months after undergoing ankle surgery.

Northampton made a bizarre start to the season, drawing 7 matches (from 7) in all competitions. Recently they have slipped to 13th in the table under manger Rob Page, who took over the role in the summer when Chris Wilder joined Bramall Lane. The Cobblers have managed just two wins in their last five league outings, including a 1-0 win at Oxford on Boxing Day.

Marc Richards struck a stoppage-time winner as Northampton snatched a dramatic 1-0 derby victory over Oxford in front of a sell-out 11,790 crowd at the Kassam Stadium. Substitute Harry Beautyman knocked Matt Taylor's corner back across the goal and Richards stuck out a foot to flick the ball home at the far post. That brought an end to Oxford's eight-game unbeaten run, but the U's only had themselves to blame with some wayward shooting and poor decision-making in the final third, as they failed to find the net at home for the first time this season.

Northampton created the better of what few chances there were in the opening hour. Taylor's stinging snap shot from 20 yards was too hot to handle for U's goalkeeper Simon Eastwood but his defenders were on hand to clear. Cobblers centre-half Lewis Nyatanga unbelievably headed a Taylor corner over the bar from just five yards.

At the other end Chris Maguire threatened from free-kicks and the Scot also forced Adam Smith into a smart save down at his right post, but Oxford struggled to get beyond the visitors' well-marshalled defence. In the second half it was again Northampton who almost broke the deadlock, Paul Anderson somehow failing to turn in a Richards header back across the face of the goal.

The Cobblers will be hoping to include Scottish defender Zander Diamond, 31 against the Blades. The former Aberdeen and Oldham man returned to the bench at Oxford after recovering from a broken cheekbone. Cobblers boss Rob Page will make a late decision on the fitness of JJ Hooper who has missed their last few games with a thigh problem.