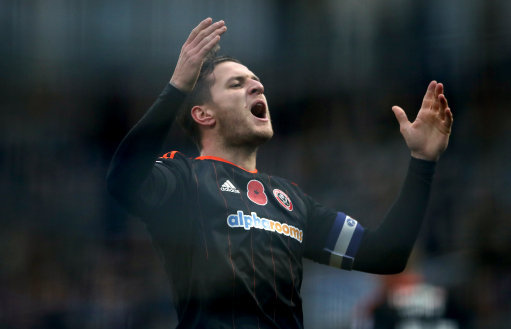 Top Scorer Billy Sharp will be aiming to add to his goals tally against his former club.

Five points separate both the Blades and the Iron in the SkyBet League One table. A home victory for Sheffield United would see them go 8 points clear at the top of the table, though I am sure most would welcome a point.

A bumper 27,000 crowd is expected to descend on Bramall Lane tomorrow with the Blades coming into this fixture having beaten AFC Wimbledon 4-0 last Saturday, before drawing 0-0 at Bristol Rovers on Tuesday night.

John Fleck was denied by the woodwork as League One leaders Sheffield United had to settle for a goalless draw at Bristol Rovers. The midfielder drove a low shot against a post from the edge of the box on 57 minutes after a poor clearance by goalkeeper Joe Lumley had put Rovers in trouble. Both keepers distinguished themselves in the second half, Lumley stretching to keep out a Caolan Lavery shot and United's Simon Moore diving to divert a Cristian Montano effort around a post.

Rovers thought they had won it when Rory Gaffney headed home on 84 minutes but the striker was ruled offside. The best chance of an even first half fell to United's Jay O'Shea on nine minutes. Unmarked moving onto a Lavery cross, his first time shot was just wide of the left hand post.

Billy Bodin offered the biggest first-half threat for Rovers and twice went close with efforts from outside the box. Ollie Clarke fired just over for the hosts but the only save of note came from Lumley, when he dived to parry a 44th-minute header from Lavery.

League One leaders Sheffield United defender Ethan Ebanks-Landell may be back in the starting XI after missing last weekend's win at Peterborough but then returning as a second-half substitute in Tuesday's goalless draw at Bristol Rovers. Ebanks-Landell was on the injury list with hip trouble.

Winger Jay O'Shea will have his eyes on a first full 90 minutes for the table-toppers, in this crunch meeting with second-placed Scunthorpe, having made his debut off the bench and then made way for Ebanks-Landell in midweek. Striker Leon Clarke is still likely to be out with his ankle injury.

Scunthorpe travel to Bramall Lane without a win in three games having suffered defeats to Southend (1-3) and Shrewsbury (0-1). They picked up a point on their last outing, a 0-0 draw with Walsall but otherwise haven't recorded a victory since 28th January.

Promotion-chasing Scunthorpe saw their winless run extended to three games as they played out a scrappy goalless draw at home to Walsall. While neither side lacked endeavour, there was a notable absence of clear-cut chances at both ends of the field, though Scunthorpe's Luke Daniels was undoubtedly the busier of the two goalkeepers. Twice he denied Simeon Jackson from inside the box before, in the 68th minute, he pushed a shot from Joe Edwards onto the bar after the Saddlers wing-back had caught Levi Sutton in possession.

Daniels also came to the Iron's rescue in the closing stages after the lively Erhun Oztumer opted to have a go at goal from 30 yards. At the other end of the field, Scunthorpe struggled for ideas and a spark in the final third as they failed to score for only the fifth time this term.

Full-back Harry Toffolo had probably their best effort of the game six minutes before the break. The fact it was straight at Walsall stopper Neil Etheridge just about summed up their night.

Scunthorpe boss Graham Alexander is hoping for some welcome news on the injury front as his side look to end a run of three games without a win. The Iron still head into the game in second place in the table but saw their advantage over third-placed Bolton cut to two points after their midweek goalless draw with Walsall.

Sam Mantom may come back into contention after returning to full training on Thursday, but Jordan Clarke remains absent with an ankle injury. Otherwise Alexander should have a clean bill of health with Kevin van Veen among those pressing to return to the starting line-up.