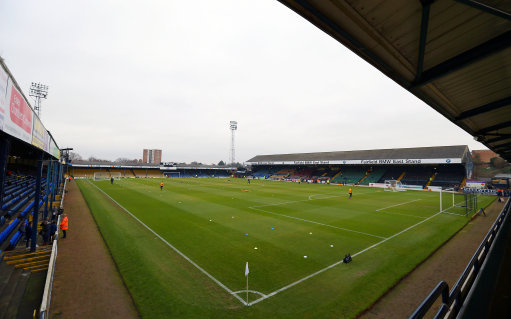 Due to non FA Cup involvement, the Blades and Shrimpers agreed to move this fixture forward (from 28th February) and whilst Scunthorpe will be involved in League One action, Bolton have a date with palace in the cup.

United extended their lead at the top with a fine 3-1 win at Bury despite going behind, and are now ten league matches unbeaten away from home.

Sheffield United went three points clear at the top of Sky Bet League One after coming from behind to win 3-1 at lowly Bury. The Shakers took a 12th-minute lead through Jacob Mellis, only for Billy Sharp to equalise nine minutes later with his 17th goal of the season. Kelvin Etuhu's own goal put the Blades in front for the first time on 72 minutes before Kieron Freeman sealed a fifth straight win for the Blades, tapping in his second in two games with nine minutes left.

Mellis stunned the league leaders by pouncing on a loose ball to fire home from 20 yards. But the visitors were soon level as Bury failed to clear John Fleck's in swinging free-kick and Sharp fired home on the turn from close range. Caolan Lavery was then denied by home goalkeeper Ben Williams before Stefan Scougall and Fleck had shots blocked.

James Vaughan spurned a great chance to restore Bury's lead as he fired wide just after half-time. And United gradually got on top before Lavery's low cross struck Etuhu and went into Bury's net. Lavery was again the provider as he squared for Freeman to make it 15 league games without a win for Bury, who are now out of the relegation zone on goal difference only.

Sheffield United's new signing Samir Carruthers is expected to be included in Chris Wilder's squad. Midfielder Carruthers, signed for an undisclosed fee from MK Dons earlier this week, could make his debut.

Wilder is hoping to extend Ethan Ebanks-Landell's loan spell from Wolves until the end of the season and turn Daniel Lafferty's loan from Burnley into a permanent move in time for them to feature. Striker Leon Clarke (ankle) will be assessed but is expected to return to contention as the Blades bid for a sixth straight league win.

Southend United have to go all the way back to 8th October since they last lost a league encounter this season. This run of fine form which has seen them win 7 and draw 6 (including their last two outings) has been the major catalyst in rising to 7th in the table.

They started 2017 with a 0-0 draw against struggling Swindon Town with their last victory coming on Boxing Day at home to AFC Wimbledon.

Swindon goalkeeper Lawrence Vigouroux produced a spectacular string of saves to earn his side a goalless draw at home to Southend. The draw for the Shrimpers was enough to see their unbeaten streak in the league extend to 13 games but it could have been even better. Swindon created the first chance after six minutes when Anton Rodgers' corner found Raphael Rossi-Branco unmarked but the defender had his shot saved by Ted Smith.

The home side let another opportunity go begging in the 27th minute after John Obika leapt above Michael Timlin at the far post but he was unable to direct his header on target. Southend should have taken the lead seven minutes later when Anthony Wordsworth played a cross into Simon Cox but he was unable to reach the ball for a tap in.

Vigouroux produced a heroic double save in the 77th minute, firstly denying Jason Demetriou from close range and then substitute Zavon Hines. The Frenchman was on hand again four minutes later to parry Hines' left-foot shot on to the post.

Southend are again set to be without winger Stephen McLaughlin because of an ankle injury for the visit of Sky Bet League One leaders Sheffield United. Forward Zavon Hines could be in contention for a first home appearance after coming off the bench in the goalless draw at Swindon following his free-agent transfer before Christmas.

Goalkeeper Mark Oxley continues his recovery from an elbow problem, while Dave Mooney and Ben Coker (both ankle) remain on the sidelines alongside on-loan Crystal Palace defender Ryan Inniss, who is out after needing shoulder surgery. Left-back Ben Coker, out since mid-November with an ankle injury, is set to resume full training next week but midfielder Adam King has returned to parent club Swansea following his loan spell.