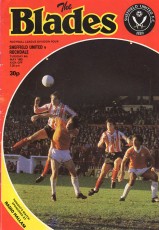 The Blades moved within two points of securing promotion to the Third Division after what was considered a 'comfortable' win over lowly Dale. In reality United needed a further point to secure promotion due to superiority of goal difference and the fact that their next game to follow was at home to Peterborough United, the only team outside the top four who had a chance of making catch-up.

Eventually United would go onto beat the Posh 4-0 in a rampant game at Bramall Lane after beating the Posh by the same score-line only three weeks previous. Dale had drawn 1-1 with Bradford City three days previous but at the Lane United showed a nervousness that allowed the opposition to produce the majority of attack, without a positive result.

Though the Spotland club struggled in defence with United needing little chances in front of goal to score; Neville Hamilton and Terry Dolan both went close for the visitors with long range efforts but it was the Blades who sliced open Dale within five minutes of play - Colin Morris threaded the ball through to Bob Hatton lashed his shot past keeper Graeme Crawford.

Keith Edwards netted the first of his brace on 23 minutes when Paul Richardson's cross was met by Edwards to score; Dale reduced the arrears on the stroke of half-time when a defensive mix up allowed Dave Goodwin to slip a simple ball to Barry Wellings who found the net.

Five minutes into the second half United showed why they would eventually be crowned Champions of the Fourth Division when Edwards finished from close range.