Former Everton and Oldham Athletic midfielder David Carney netted the game’s only goal as Sheffield United recorded a 1-0 victory at the Reebok Stadium and dumped Bolton Wanderers out of the FA Cup.

Carney, who arrived at Bramall Lane this summer from Australian outfit Sydney FC and repaid his club with his first goal in English football.

With three minutes remaining of the first half young Quinny (Stephen) picked out Carney wanting who skipped past his marker and his left foot drive flew past the keeper. 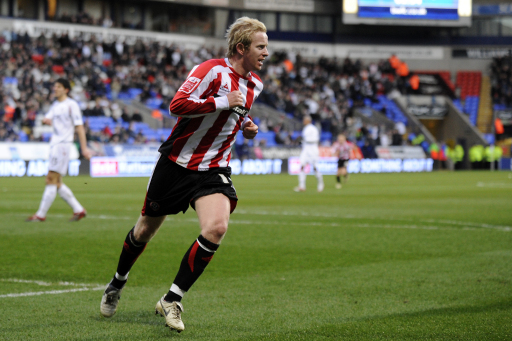 Carney wheels away in celebration after scoring

Wanderers boss Gary Megson made some changes to his side with notably Nicolas Anelka left out whilst Kevin Davies was suspended.

The home faithful rarely troubled Paddy Kenny's goal throughout the game with the visitors wasting the better of the chances with Luton Shelton heading over from close range.

Yet, despite the Blades recent poor lack of form it would be difficult to see which team were in the English top flight as the Red & White Wizards played without fear - and hope to take that into the next game against Queens Park Rangers. 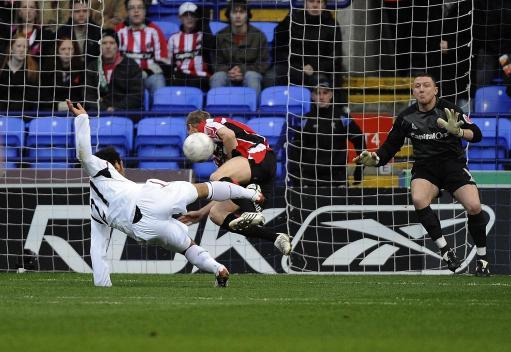 The home side had a few chances with Daniel Braaten seeing his shot blocked by Matthew Kilgallon whilst Megson introduced Dzemaiili at half-time.

Danny Guthie forced Kenny into a decent save whilst Lubomir Michalik forced the keeper to make a low save without really troubling him.

It was a decent performance by United who finished off the goal in style but didn't attack the Bolton goal as much as they could in the second half - still they won the game and will go into the hat for the fourth round.