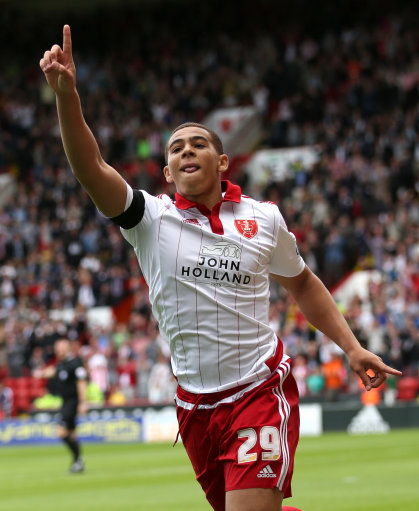 Adams first half strike was enough to ensure a win over Doncaster in what was a tame and dull South Yorkshire Derby. Adding the 3-1 win at the Lane earlier in the season, this victory completed the double over Rovers and kept the Blades seven games unbeaten (in the league) away from Bramall Lane.

Craig Alcock and Andy Butler, both formerly with United lined up for the hosts but Billy Sharp missed out. The 14 goal striker missed out through injury as Blades boss Nigel Adkins made four changes from the side which lost at home to Wigan the previous week. Dominic Calvert-Lewin was handed his first start for United whilst Louis Reed, Jamal Campbell-Ryce and Adams were all included in the starting XI. Chris Basham, Paul Coutts and Conor Sammon were on the bench.

It was Sheffield United who started the better of the two teams and almost took the lead in side four minutes in what was a particularly bitter cold day in February. Reed's cross found Baxter who controlled and attempted to lob keeper Neal but the stopper was able to tip over the bar. United continued to pressurise their opponents in the early exchanges and came even closer when Collins head Baxter's delivered corner against the bar.

At the other end the Blades were almost caught out by a long ball forward, swept along by a prevailing wind Williams got behind his marker Edgar but the forward found himself crowded out with any immediate danger averted. Calvert-Lewin, who has eight goals to his name already this season, having completed a loan spell at Northampton headed into the side netting from Brayford's cross into the box.

The visitors were clearly on top but had two scares in quick succession in front of their own goal half way through the first 45 minutes. Firstly, Tyson edged past Edgar and after playing in Williams, he saw his effort blocked before the latter beat Long with his header but Edgar scampered back to clear off the line in a nervy few minutes.

As the first half drew to a close United's dominance was rewarded with a goal on 42 minutes. Controlling in midfield Baxter provided a neat chip into the box for ADAMS to chest down and with the advancing keeper cutting out his options the former Ilkeston striker poked the ball past Neal before wheeling away in celebration.

Alock replaced Butler at half-time for the hosts, a move which allowed Stewart to play a more attacking role. Collins got on the end of Hammond's cross whilst Stewart stung Long's hands from close range after Gooch played him in, in the early exchanges that made a slow start to the second half with neither side threatening to take any meaningful opportunities at goal.

Eventually, the home side slowly started the second half proceedings better than the first and their best chance of the match came on 57th minute. On the right, Stewart and Gooch combined with the latter whipping into the box but an outstretched Middleton almost connected but the ball was just shy of his foot.

Alock was booked for a challenge on Reed and midfielder Hammond became the first Blade to be handed a yellow card following his foul on Mandeville as, in typical fashion, the South Yorkshire Derby turned into a scrappy affair. Adams skinned his marker before teeing up an unmarked Reed who was one-on-one with the keeper but Neal was able to prevent a second United goal, with 18 minutes remaining it would have doubled their lead and surely finished the game off.

During the period of the final 15 minutes Adkins used all of his allowed three substitutions which only continued to slow the game down, much to Rovers frustrations. The fresh legs of Flynn, Basham and Woolford replaced Campbell-Ryce, Reed and Calvert-Lewin. In the 88th minute the hosts came close to an equaliser, but Edgar was in the right position to deal with Alcock's cross with both Tyson and Mandeville looking to take advantage.

As four minutes of injury-time was handed out Baxter sent his shot flying over the bar. The remainder of the game passed without any threat on the United goal and as the final whistle blew the 3,784 travelling support cheered with joy and relief.