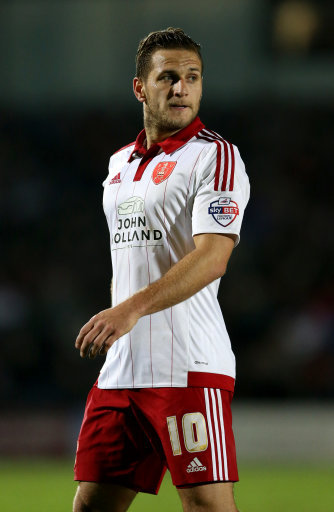 Sharp's half volley in front of the Kop in the second half was enough to lidt the Blades into seventh in the table as well as securing their first home victory of 2016 against Rob Page's Port Vale. They had come close in the first half but Hammond saw his header cleared off the line.

Nigel Adkins had clearly adopted a 3-5-2 formation, much different from the traditional 4-4-2 used by United this season. Brayford and Woolford operated as wing-backs with Edgar, Basham and McEverley operating in centre-defence. Sharp partnered Adams in attack with Hammomnd, Flynn and Reed in the middle of midfield. Calvert-Lewin and Campbell-Ryce dropped to the bench, whilst there was a surprised inclusion for the returning Florent Cuvelier.

When the game kicked-off it was the hosts who started off the brightest and carved out the first opportunity of the match when Neal was forced into action, saving Adams effort after he was fed by Edgar. Grant's effort at the other end was deflected wide for a corner.

United continued to control the game as Duffy cleared Brayford's centre before the right-back fired over the top from what looked a promising position. United had the ball in the back of the net twice but were both ruled out, the first Hammond was deemed to have fouled Neal in the process and Sharp saw his shot cancelled out by the linesman's flag.

Hammond became the first player to be booked, following his challenge on McGivern shortly after the half hour mark. Ten minutes later the on-loan Leicester midfielder thought he had found the net but his header was cleared off the line by Dickinson with the lineman again foiling any opportunity to score. Basham was booked after a mistimed challenge on Kennedy. Brayford and Flynn saw efforts blocked before Sharp saw his shot narrowly go wide of the post in what was the last action of the first half.

Both sides re-entered the field for the second half with neither manager prepared to make any changes just yet. It was United again who started the half the better side and within five minutes were rewarded with a goal for their efforts. After McGivern failed to clear Hammond's cross from the right, SHARP was able to half-volley a stray ball past Neal.

The visitors made two changes in quick succession with Hooper and Kelly replacing Robinson and Moore, but this was after McGivern side-footed over the bar from the edge of the area. On 66 minutes Cuvelier replaced Hammond (who looked destined to receive a second yellow card had he stayed on the field) for his first appearance of the season. Kelly was then booked for a hasty lunge on Reed.

United looked dangerous on the break as this new look formation was taking shape but failed to finish off their opponents who they, themselves, had speculative efforts from distance which failed to test Long. Adams received a cheer from the crowd (for good effort) when he was substituted for Done on 80 minutes, and two minutes later Coutts replaced Flynn for Adkins final change of the afternoon.

Vale mounted on pressure as the clock ticked down but when McGivern was booked for a foul on Sharp, the hosts where able to slow the game down. The fourth official signalled four minutes of injury time but despite a number of balls into the, the visitors were unable to level the scores.