Blades Mauled By the Lions 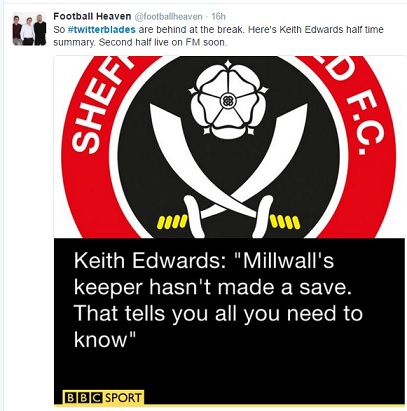 Chris Taylor netted the game’s only goal less than two minutes after the kick-off to succumb the Blades to another defeat on the road and further dent any plans for a late Play-Off revival. But despite defeat, Sheffield United still remain six points behind sixth spot and next weekend's Easter fixtures will prove vital if they are to achieve what looks like an unlikely goal. Blades boss Nigel Adkins made three changes from the side which turned over Oldham by three goals to nil seven days previous. Jay McEverley, Ben Whiteman and Che Adams all dropped to the bench with Chris Basham returning and taking the captaincy, along with Florent Cuvelier and Conor Sammon given a rare start.

United have made good starts to the majority of games this season but this one at the Den was with exception, less than two minutes of play had taken place when Morison's left sided cross saw the defence half clear at the near post but the ball fell kindly to the unmarked TAYLOR to fire past Long and punish their visitors for lacklustre defending. Utilising the space out wide the visitors made strides in putting Milwall on the back foot, whilst also dealing with strong winds and a bouncy pitch. When United saw first glance at goal, Sammon's effort proved too tame to test Archer in the Lions goal.

Home striker Lee Gregory, 27 made his career through Non-League football after been released as a youth by the Blades in 2008. He looked dangerous throughout and in the hosts next moved almost doubled their advantage, poking the ball past a rushing Long only for the ball to drift wide of goal. Martin then headed wide from Ferguson's free-kick.

Despite the lack of chances, United won a fair number of first half corners but was unable to turn these opportunities in chances in front of goal as the home side controlled the game. Within the space of a minute Long twice had to rely on the woodwork to prevent an even bigger uphill struggle as both Gregory and Morison tested the keeper once again.

Sammon finally had the ball in the back of the net as half-time approached, it marked a sign of an improvement in what was otherwise a disappointing first half display from United, but the on-loan Derby man would have been left frustrated after seeing an offside flag chalk his goal off after collecting Flynn's ball through.

Adkins was forced into a change three minutes into the second half when on-loan Middlesbrough defender Alex Baptiste went hobbling off out of action. He was replaced by McEverley who joined the trio of centre-halves as United once again lined up in a 3-5-2 formation. The visitors had started the second half proceedings better than the first and had begun to build some pressure on the Millwall goal. Both Brayford and Flynn saw their shots blocked and had Sammon's ball through connected perfectly to Sharp, the striker would have been clean through on goal!

Sharp headed straight at Archer as Done supplied a number of crosses. United's dominance in possession was shown when Taylor fired over the hosts first chance of the second forty-five minutes on the 70 minute mark. As the Blades searched for a level score both Coutts and Adams were thrown on in place of Cuvelier and Sammon, Long pushed Morison's header over the bar and on 76th minute, after good play from United, Sharp almost bulged the net with his near post header after Basham delicately crossed.

Further pressure was put on the Millwall goal but the defence stood firm and chances became too and far between as the hosts held out for a narrow win, collecting all three points as the Blades search to reaching the play-offs continues.