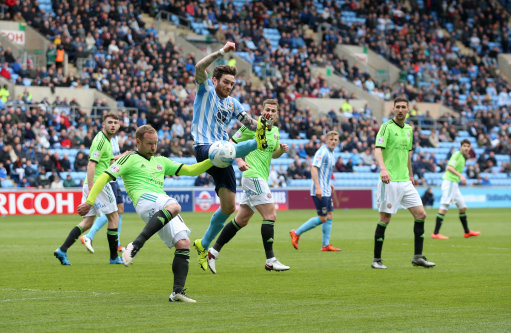 Following last weekend's defeat at Doncaster the Sky Blues saw their Play-Off bid halted and their win today did exactly the same for Sheffield United, who are now unable to reach the top six and will go into next Sunday's fixture at home to Scunthorpe United with nothing left to play for. It was a frustrating result as results elsewhere had worked in their favour and a win at the Ricoh would have seen them two points away from sixth spot.

Blades boss Nigel Adkins has fielded the same XI for the last five matches but owing to the absence of Hammond and Howard, who's partners were due to give birth, meant an enforced change with Ben Whiteman starting and Academy Under-21 keeper Aaron Ramsdale included on the bench for the first time.

Prior to the game the hosts held a ceremony for the late Jimmy Hill, scattering his ashes outside of the ground. There was also an opportunity to play 'You'll Never Walk Alone,' paying homage to the 96 Liverpool fans who tragically lost their lives at Hillsborough Stadium.

In the recent Fans Forum, chaired by Co-chairman Kevin McCabe, he hinted that 'bad luck,' had prevented United from gaining promotion since 2012. Sometimes you have to create your own luck but he would have gleaming that his point was proven when City netted inside the first four minutes from the kick-off. Armstrong, searching for his 20th of the season cut in from the left hand side and has his shot hit the back of the net, he wheeled away in celebration, but the goal was given to FORTUNE after the ball his struck his bum before hitting the target.

The hosts would soon double their lead and make the afternoon's work an uphill struggle for United, Adams hit the side netting after getting past Vincelot. At the other end, Cole collected the ball after the Blades half cleared a corner and the former West Ham midfielder found ROSE to clip home on the angle with Long rushing off his line.

United looked to get back into the game despite finding themselves two goals behind. Sharp got round the back of the defence after Basham and Baptiste played a quick free-kick, but the striker found themselves evaded by Stephens. Then, from Whiteman's cross, Charles-Cook was forced into a save once Adams connected at the rear post.

Coventry then saw two shots blocked and hacked away. Armstrong then got the better of Baptiste and looked to be in sight of goal, but the defender recovered to prevent the on-loan Newcastle man.

Flynn saw his shot pushed wide by the City shot-stopper on the half hour mark and moments later the keeper was tested by Sharp but the defence cleared his low cross. As the first half drew to a close it was the visitors who were creating the majority of attacking play but were unable to hit the back of the net despite their attempts, Basham coming the closest but could hit the target with his header at the far post.

The early exchanges of the second half saw the hosts hunt for a third which would have surely killed off the game, a Hunt cross and Fleck's long-range effort looked to test their vulnerability. United saw a penalty appeal turned down when Cole was judged to have handballed inside the box as Adams shot at goal went straight to Charles-Cook.

Moments later the Blades would be handed a spot kick, on 58 minutes Sharp was bundled over after play from Flynn and Adams saw the striker involved. SHARP stepped up and smashed it past the keeper.

Coutts saw his effort blocked, and his free-kick cleared as United piled on the pressure. He then fired over from 25 yards whilst Basham also curled wide, and Cole alleviated pressure but saw his effort flash wide. All the attacking action was coming from the United side in green shirts as the game entered the final 15 minutes. Basham fired wide of the mark from 10 yards.

Coventry managed to force a counter-attack but a combined defending duo of Long and Done kept out Jones, but two minutes later Done lost possession and City had enough players attacking for LAMEIRAS to fire home with Long's goal at his mercy, putting the game beyond reach.

Graham Kelly was introduced with little over a minute remaining, he replaced Matt Done and in the process making his debut for the Blades. In injury-time Edgar saw his header blocked by his team-mate Adams after Coutts swung in a corner.