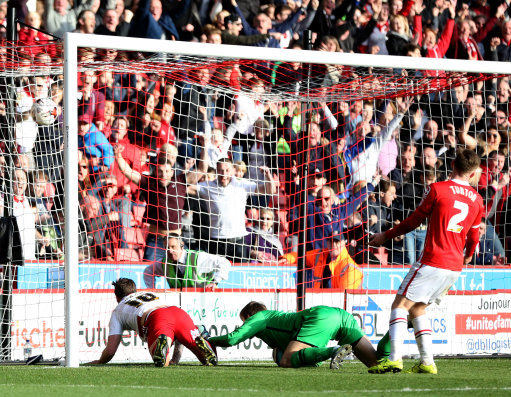 Sheffield United were punished by relegation threatened Crewe after failed to take first half chances, despite the Blades taking the lead with two goals in each half through Che Adams and Ryan Flynn. But a second half rally from the visitors saw David Fox and Harry Davis draw the score level. Crewe looked good for a point until Billy Sharp netted his 17th goal of the season, and more importantly, a United victory!

Owing to defensive frailties, with Alex Baptiste injured and David Edgar away on International duty with Canada, Chris Basham was brought back into central defensive whilst Harrison McGahey was handed a rare start, and on this performance looks set to be included at Southend. With the exception of Conor Sammon and keeper Mark Howard, the substitutes bench was made up of Academy players; Louis Reed, Ben Whiteman, Dominic Calvert-Lewin, David Brookes and Graham Kelly were all in reserve.

It was Sheffield United who were quick out of the stumbling blocks, shooting towards the Bramall Lane End in the first half, the Blades would see themselves rather unfortunate not to found themselves two goals better off inside the first 15 minutes of the game. Last week, United conceded the game's only goal at Millwall with 90 seconds gone on the clock, but in the Good Friday fixture it was United who almost went ahead in such a short time frame. Done's delivered corner from the right was met by the powerful head of Brayford at the far post, his header looked goal-bound but keeper Garrett reacted quick to claw the ball off the line to prevent a sure goal.

At the other end, Kirk ballooned over a rehearsed corner kick but United, continuously on the attack, was soon handed another golden opportunity in front of goal. A move down the right flank saw Coutts fire a low cross into the box, and Sharp's effort was somehow saved by the face of Davis. On 15 minutes Sharp then curled an effort against the post.

If the players were feeling frustrated at missed opportunities in front of goal, any anxiety would soon be relieved. Good work through the middle, involving play from Sharp and Flynn, laid off ADAMS to his left who, from 15 yards out, easily beat Garrett.

Crewe offered little resilience, with the exception of a feebly appealed penalty kick, and was clear to see how they have ended up in a relegation battle, as United dominated the first half proceedings. Sharp was judged offside after he converted a re-bounded effort into the roof of the net after Garrett made a good save from Adams. As the first half whistle approached, Sharp and Adams linked up again with the former Leeds striker being too generous in his play, he had time and space to shoot at goal himself inside the area, but opted to lay off to Adams, whose effort beat Garrett but dragged agonisingly wide.

Bingham was brought on for Nugent at the break as Crewe made their first change of the afternoon, and it was the visitors who made the better start to the second half as United looked nervous. Having beaten Basham, Inman saw his shot blocked by Long and McEverley, and from the resulting corner, Long parried away Kirk's effort.

Crewe inflicted further attacks on United's goal but failed to hit the back of the old onion bag. Six minutes in Bingham was gifted space to shoot from distance but Long positioned well to save and Fox saw his free-kick deflect wide of goal.

They would be further punished just after the hour mark with an instinctive strikers finish. It was the Blades first proper attack in the second half, Coutts deep cross resulted in Sharp heading across goal, and after Guthrie failed to clear his lines, FLYNN controlled and with his back to a roaring Kop, and team-mate to pass to, he acrobatically flicked the ball over his shoulder and past a stunned Garrett.

Crewe might be fighting for their lives at the bottom, and may well end up playing League Two football next season, but with nothing to lose they showed that a two goal lead is never a safe cushion for three points as they rallied together and 7 minutes after Flynn's cheeky overhead kick, FOX pulled one back with his long range, and yet speculative effort, beating Long in the bottom left hand corner, 25 yards from goal.

Adkins rang in the changes with Whiteman, Calvert-Lewin and Reed replacing Hammond, Adams and Coutts inside the final 20 minutes of play. On 82 minutes the Alex drew level to a much energetic travelling support as DAVIS beat Long from close range after Ainley pulled back on the by-line.

United would have the final say in this games story line. A good link up between Whiteman and Reed saw the latter deliver calmly into the box for SHARP to swoop at the far post and finish with a diving header. Crewe searched for another equaliser in the three minutes of time remaining + the six minutes of added on time but United hung on to secure all three points. Kirk's half-volleyed effort went wide and Long held onto Inman's shot. Their final opportunity of the game saw Done save the day as Balayogo's cross was met at the far post by Turton who looked likely to finish but Done bravely blocked.